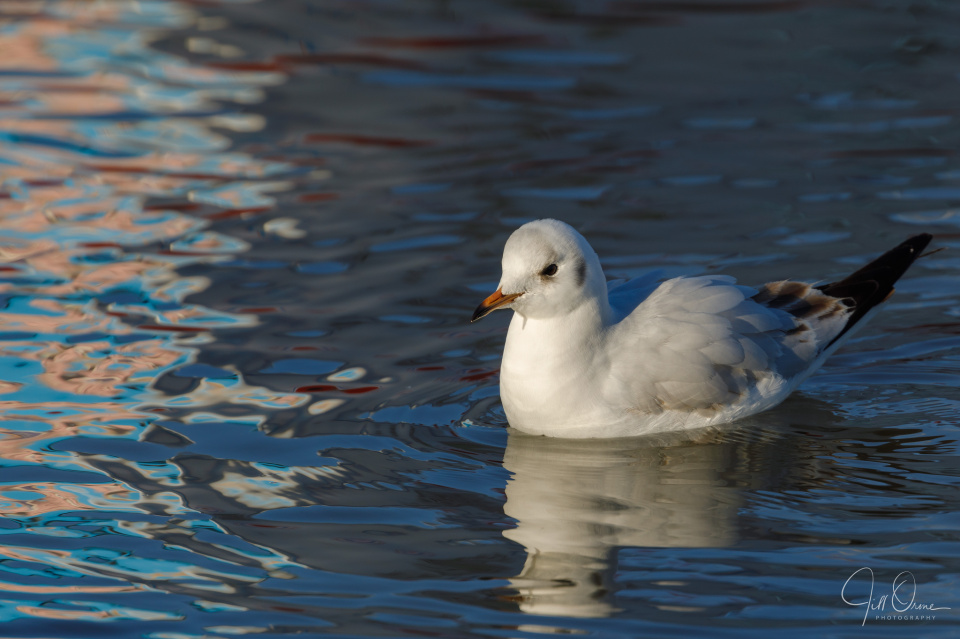 Caught between having overslept after getting to bed late last night, and having an appointment with the osteopath this afternoon, I didn’t have time today to go gadding about. But the light was lovely, so when I went to run errands in Stratford I made sure I had enough time to walk along the river.

In terms of personal development the most pleasing thing was hearing a bird call that I didn’t recognise in the gardens by Holy Trinity church yard, managing to track the bird down, and discovering that it was a nuthatch (tick!); but it wasn’t hugely cooperative about having its photo taken, so the best I managed of it were record shots. More photogenic was the way the light was bouncing off the water, and though you’d probably expect me to post a duck against that nice bokeh, on this occasion my favourite shots were of black-headed gulls. This one was drifting about on the Bancroft Basin, and that painting by numbers effect on the left side of the image comes from the reflection of a canal barge.

My session with the osteopath was so exciting that I wonder the person waiting in the next room for her appointment didn’t flee the building while she had the chance. I wanted to post a clip of the incomparable Phil Davies as Mr Smallweed being “shaken up” by his granddaughter Judy, to give you some idea of the treatment I received, but sadly the BBC is all over copyright infringement these days; however, if you saw the series you’ll surely remember. Tomorrow I expect to be either much improved, or… very sore indeed.

This evening R and I have been out to see The Favourite, which I enjoyed very much right up to the final two minutes – when it seemed to me that the director didn’t know how to end the story, so just let it fade out. The three female leads were excellent – especially Rachel Weisz, I thought – and they had good support from Nicholas Hoult and some extraordinary wigs.