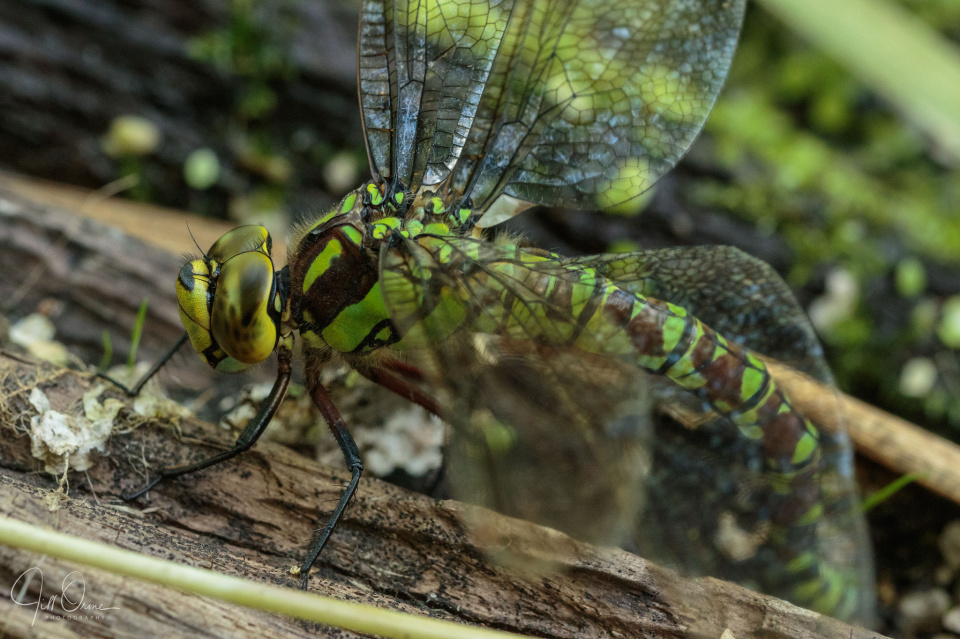 I was all set to post the extra as my blip today, but L (who has zoomed back from Cardiff this evening for a family meal with her ageds and her brother) came to talk to me as I was processing this shot and said “Wow!” – which is all the encouragement I needed to change my mind! Please do look full-screen, if you have the time – I’m really quite pleased with the detail here, especially as I was leaning somewhat precariously over a pond when I took the photo. 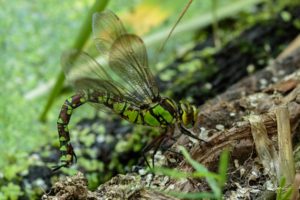 It’s been lovely to have both Offspring at home tonight, but their company has definitely been the best thing about the day: I woke this morning to a rheumatic flare (my own fault for overdoing things for the past few days, in weather that really doesn’t suit my system), and I’ve been struggling to cope with anything more than the most basic activity. When I went out in search of photos this morning I elected to go to my neighbours’ pond because it’s only a couple of hundred yards down the lane, and I only took the small camera and macro; but my resolution not to stress my hands with the 5D and big zoom bit the dust when this lovely female Southern Hawker suddenly clattered in and landed quite high up in a tree beside the pond – after a brief internal struggle between the sensible person and the photographer, I found myself limping off home with the one camera, and returning to the pond a few minutes later with both.

In the meanwhile the Hawker had gone off about her business, but I hoped she might come back; about quarter of an hour later she clattered in again, and then spent the next half hour or so alternately patrolling the pond for food and ovipositing into this piece of rotting wood. I had a distinct sense of déjà vu, because it’s the same pond, and quite possibly the same piece of wood, on which I photographed another Southern Hawker in August last year; I called that blip Circle of Life, and today it really did feel as though I could feel the circle turning.

The difference from last year was that today there were some quite tall reeds between the wood and the edge of the pond, and I had to lean over and carefully push the lens through them in order to get clear shots. To begin with the Hawker was quite disturbed by this, and kept flying up and circling round me as though she was assessing me – and on three occasions she actually landed on me and had to be gently discouraged from ovipositing into me instead – but after a while she seemed to decide that whatever I was up to was not a danger to her, and she settled to her task. In the end I managed to get close enough to her to use the macro, and this shot is only fractionally cropped.

The extra shows her in the process of changing oviposition sites. The blade-like structure on the underside of her abdomen is her ovipositor, which she was using to inject her eggs into the decaying wood, and which I was quite keen for her not to use on me. I’ve discovered from reading the species description in my [i]Field Guide to the Dragonflies and Damselflies of Great Britain and Ireland[/i] by Brooks and Cham that this wasn’t a ridiculous notion: they say “Females have been seen attempting to lay eggs into the edge of a dry stony lane, into wooden bridges, into shoes, and even into human legs!”. I remember having a chat with a female Southern Hawker at Sezincote last summer about the unwisdom of ovipositing into a bridge, and I did wonder at the time if they were perhaps not the brightest….

If I haven’t already exhausted you patience – and especially if you’ve never had the chance to see a dragon ovipositing – I took a short piece of film of the process on my phone, and I’ve posted it here.