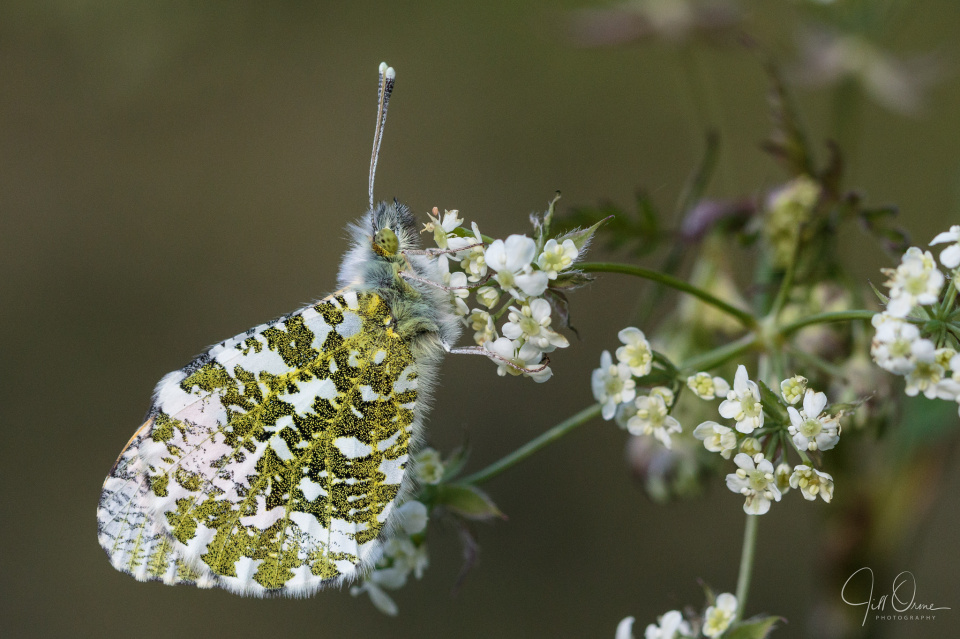 Several male Orange Tip butterflies have been quartering the village in search of females for a couple of weeks now. This afternoon I spotted a female – the first I’ve seen here – resting on some cow parsley, and I was slowly moving into position for a portrait shot, when a male arrived and attempted to court her. If you check out my extra you’ll see that she rejected him very firmly, raising her abdomen to make penetration impossible, which probably means that she had already mated. He persisted for about half a minute, and then left her alone and came down on a nearby plant, where I was able to get some images of his lovely underwing patterns. 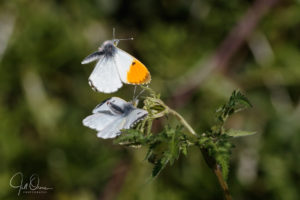 A more promising encounter took place at Kemerton Lake this afternoon, when a female great crested grebe that had been pootling around in front of the hide suddenly spotted a male further out on the water, and swam to meet him. They did their charming courtship dance, bobbing their heads, raising their crests, and generally admiring each other, before swimming rapidly into the channel on the west side of the hide, and disappearing into the reed bed. I’m already seeing photos of GCG chicks from other places around the country, but as we’re not yet at the end of April I’m hopeful that they may still nest and breed. I’ve put a few shots on Facebook, if you’re interested.

I was, of course, hoping that there would be little grebe chicks at Kemerton by now, but there’s no sign of any yet – though I’m pretty sure that among the general cacophony of competing bird calls today I could hear the tiny peeping noise of young birds among the reeds near the hide. I spent quite a long time standing on the boardwalk listening to a couple of reed warblers wittering in the reed bed, but still didn’t manage to spot them; but a bird that flew up and chattered at me from a hawthorn tree turned out to be a sedge warbler, which was a welcome first sighting of one of those this year.