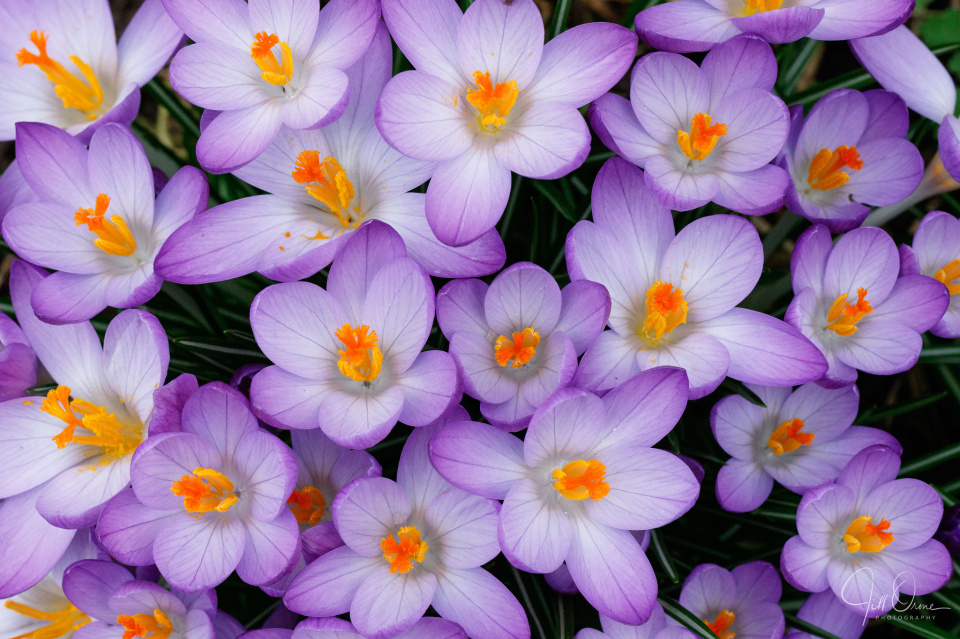 The middle of February generally brings on a crocus post, and this is it for this year. Had I shaped myself first thing, I could have shot this rather glorious patch of colour in nice light, but R and I had an early(ish) appointment in Stratford with the solicitor (also a nature photographer, I’m happy to report: all the best people, etc., etc.), and I was struggling with my joints after a run of bad nights, so getting myself out of the house and into the car was the highest level of achievement I could manage.

After our legal meeting R and I had a second appointment with some coffee and cake, and then we walked along the river, where there wasn’t anything much happening, and by the time we made it home again it was lunchtime, and the light was gone. In truth I don’t mind shooting scenes like this in flat light – better that than too much contrast and too many shadows – and though I could have done without having to stretch the exposure triangle quite as much as I did here, I’m reasonably happy with the result.

After snapping various of the clumps of crocuses that have naturalised around the garden, I wandered about for a while to see what else I could find, and discovered that the cherry plum tree in the hedgerow along the lane, which is usually our harbinger of spring, is now bursting its buds. In a poor year this can happen as late as the first half of March, and there have been a couple of scarily warm years when it has happened in January, but mid-February is pretty much the norm. If I’m lucky the blossom will survive Storm Dudley (currently over us, which made for unusually exciting journeys to and from choir practice this evening) and Storm Eunice (due in on Friday), and I’ll get to photograph it in kinder conditions, but today’s photos were more like this than this, so for today the crocuses definitely win out.