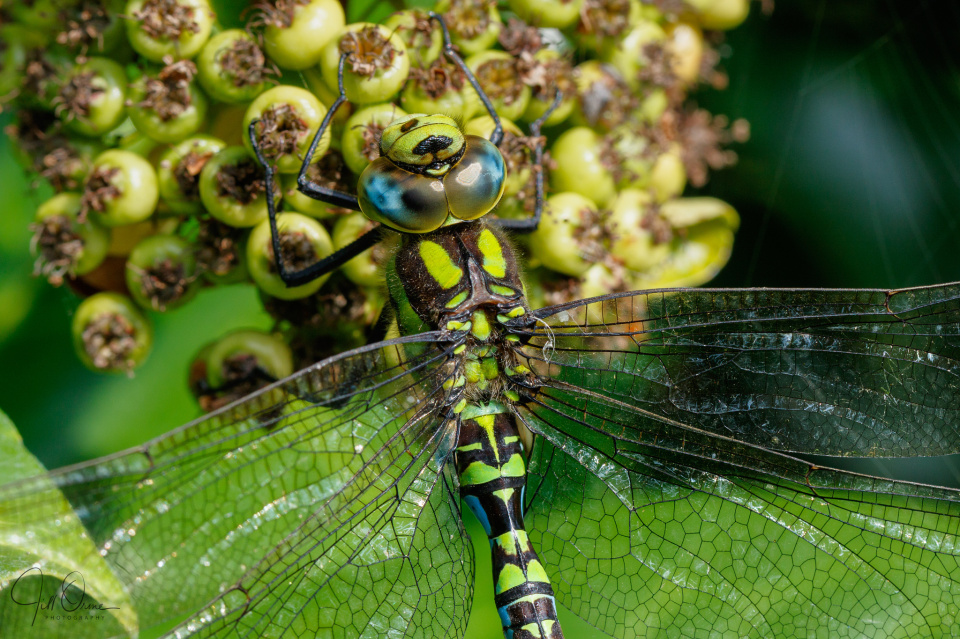 So there I am, earlyish this morning, searching the garden for invertebrates, macro in hand, reading glasses on because I’m soooo long-sighted now, and therefore needing to be no more than about eighteen inches away from any surface I’m checking, because that’s the distance they’re set up for. And I wander over to the pyracantha to look for shieldbugs, lean forward, and realise that I’m almost nose to nose with a Southern Hawker.

I reeled backwards, and then inched forward again, as though it were remotely possible that he hadn’t noticed me the first time round. You cannot creep up on a dragonfly, even if you don’t blunder right into its personal space, because their wraparound eyes give them near-360° vision, and some part of their brain is always watching for danger. Luckily though, Mr Whiskers here was still a bit cold, or it’s likely that he’d have left in a huff – and I’d probably have keeled over in shock when he took off in my face – but as it was he tolerated my attention with reasonable grace, and I got all the photos I could possibly have asked for.

Today was the kind of warm and sunny early September day that feels like a pre-autumn gift, and R and I spent quite a bit of it in the garden – partly working, but we also sat out on the patio before lunch with some chilled rosé wine, just enjoying the moment. I also (of course) went on periodic bug hunts with the camera, and found some quite interesting subjects.

This afternoon while I was down in the wild garden I had another close encounter with a male Southern Hawker. Whether or not it was Mr Whiskers again, I can’t say – you can identify a Southern Hawker by the unique markings on its face, but that won’t help you if you have elderly eyes and he’s zooming around hunting, as this one was. I stood and watched his performance from the side of the garden for a few moments, and then walked out into the middle of the area and marvelled as he flew circuits around me. Suddenly he turned and flew straight towards me, then went into a steep climb that took him right over my head, and disappeared into the next-door garden. As he flew almost vertically past my face, I heard not only the sound of his wings, but also a faint ‘snick’, which I always assume is a dragonfly’s mandibles closing on some tiny airborne item of prey. The experience made me laugh aloud with pleasure, though as I said to R afterwards, if any other three inch long insect had flown at me like that, I’d probably have ducked and screamed.

Dragonflies, though. Dragonflies are just… special.