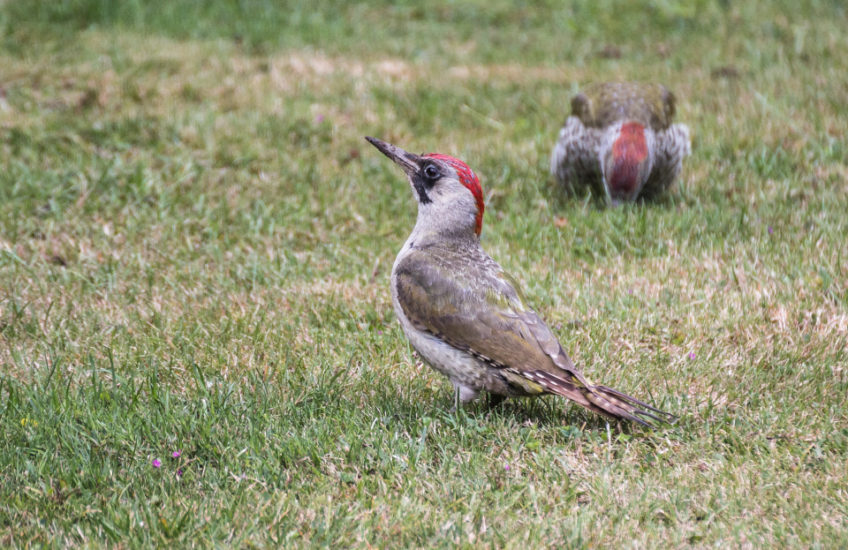 It was cold, dark and blowy this morning, and I was in an equally horrid mood. I was wandering about in my dressing gown like Waynetta Slob, unmotivated to do anything useful, when I spotted this pair of green woodpeckers in the back garden. The adult might even be the one I photographed on Saturday because she looks quite young to me, but if so she’s a teenage mother – the second one is a juvenile, and from the way it came up close to her when it felt threatened it must be her offspring. I say “it” because it doesn’t yet have a moustache marking that I can use to determine its sex.

All the shots I took are a bit grainy and distorted – the lens was at full stretch, and I was shooting through the window glass of the back door – but this is pretty clear of Mum, and shows Junior working on an ant nest which I like to see. The extra is a much clearer shot of the juvenile, showing how very speckly they are in their first season. 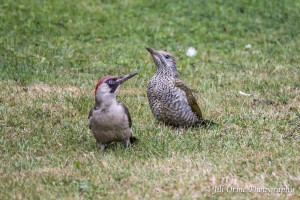 Shortly after I took these two photos, one of my neighbour’s cats suddenly dashed out of the apple tree bed, chasing a woodpigeon – but the woodpeckers took off too, with much indignant yaffling. I opened the back door and suggested to Roley that he might like to go and have a word with her. He put his head on one side for a second, decided that although the word “cat” did appear in his database it was only ever found in phrases such as “Leave that cat alone, you horrid terrier!”, and that therefore his best course of action would be to leave that cat alone, and placidly returned to nibbling his toenails. So I had to go and have a word with her myself. I fear, however, that we may have failed to reach an understanding on the whole her-staying-out-of-my-garden situation, because I came across her again later when I was doing some weeding – she shot off back to her own garden immediately she saw me, but I fear that she won’t stop using mine as an extra hunting territory unless I apply a strong deterrent.

The other interesting thing that happened today was that as the dogs and I were coming home from our morning walk along the edge of a field of barley, I noticed that it was making a noise like a bowl of Rice Krispies. I’ve never heard that before, but I suspect it means that the crop is ripe and ready for harvest. If the light is interesting tomorrow (and if I don’t have to wait in all day for the Bosch engineer to come and mend the tumble dryer) I’ll go and see if I can get a Wide-angle Wednesday shot across the top of the barley before I miss my chance for this year.