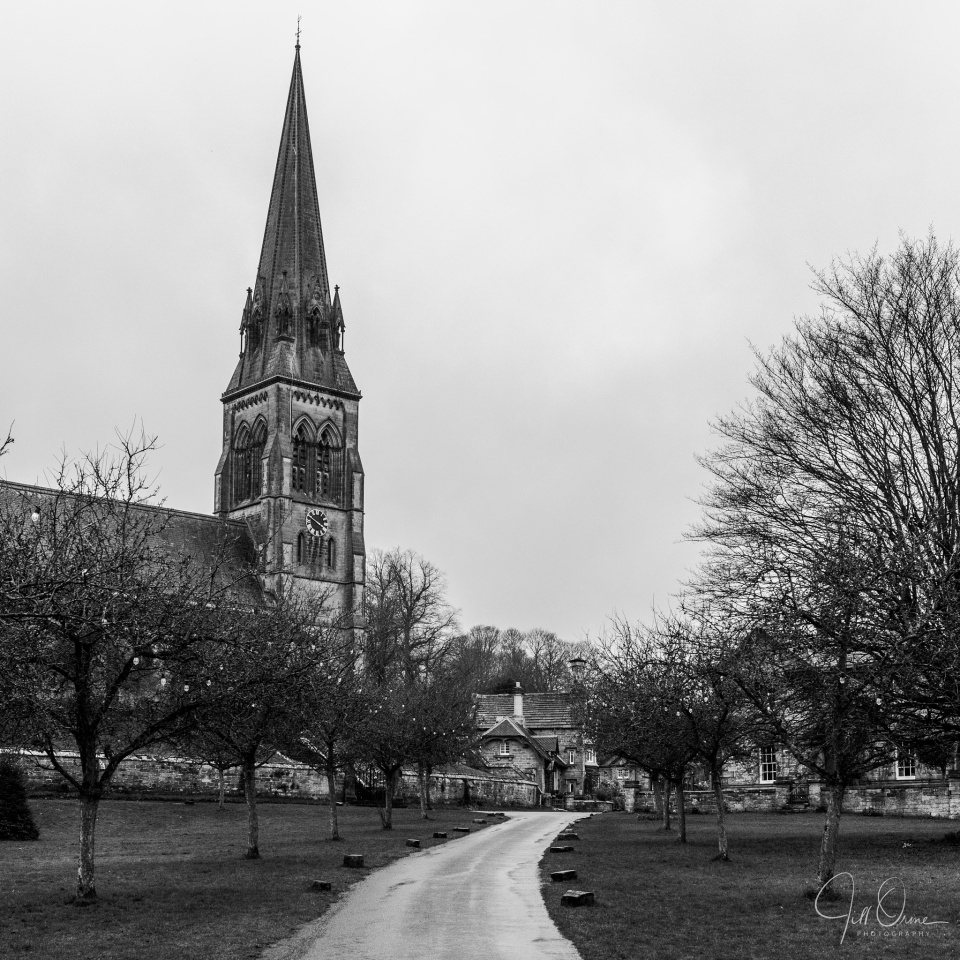 This is Edensor, which R had to remind me this afternoon is pronounced ‘Enzer’. But he’s virtually a local, whereas I’m not, even though I lived on the Derbyshire edge of Sheffield throughout my teen years.

Anyway. We were up in the Frozen North Midlands today for lunch with R’s aunt B, and detoured into Edensor on our way back south, specifically so that I could take a photo or three – my cunning plan to capture a lovely image of the Peak District National Park in the bright sunshine we’ve enjoyed over the past few days having been foiled by the weather forgetting that it’s supposed to be doing spring now, and suddenly reverting to November. This did at least mean that R didn’t have to listen to my well-worn Pining for the Peaks monologue, and we didn’t have to have the usual argument about whether the uplands of Derbyshire are more or less hospitable in the middle of winter than the bottom of a sodden trench in Worcestershire.

Edensor has been around since before the Normans arrived – it’s listed in the Domesday Book – but it used to be somewhere else. In 1762 the then Duke of Devonshire decided that the original village was spoiling his view across the lovely rolling parkland created for him by Capability Brown, so he had part of it demolished. Honestly, don’t get me started. A couple of Dukes later the rest of it was taken down to make way for a road, and the current village was constructed around the little Norman Church of St Peter, under the management of a guy called Joseph Paxton (a genuinely interesting character in his own right).

The vicarage and pub from the original village were moved and rebuilt, but the other hundred-plus houses were newly designed and built in a variety of styles, from mock-Tudor to mock-Swiss chalet, creating a rather odd but undoubtedly interesting effect. By the middle of the C19th the village was already quite famous and well-visited, and now almost half of the buildings are listed and it’s regarded as a very desirable place to live. I’m sure you’ll have noticed that this is not a little Norman church: that one somehow failed to live up to the new model village that had sprouted around it, so it was rebuilt in the 1860s under the direction of George Gilbert Scott. Rumour has it that there are bits of the C12th original in there somewhere, but probably not much. The current building is Grade I listed, and it’s said to be very beautiful inside (even if the outside does make me think of a London railway station). One day I might find the time to go in and check it out.