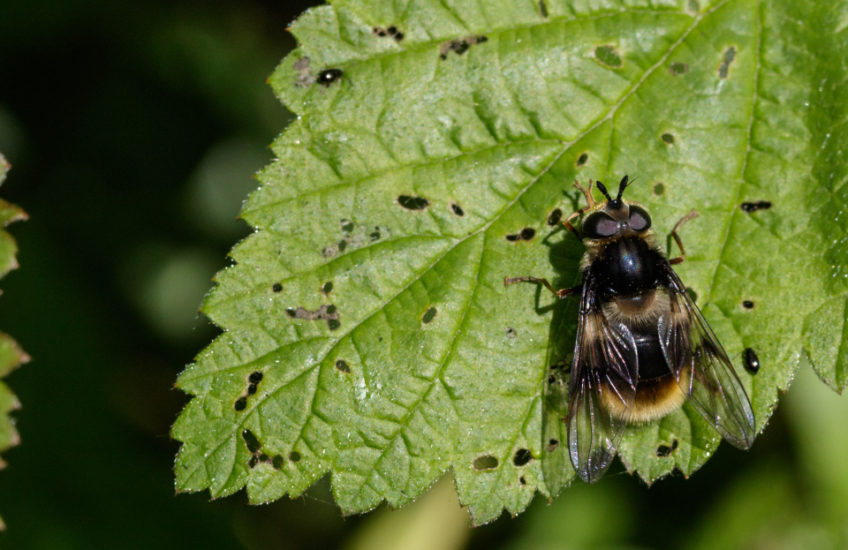 I had absolutely no idea what this was when it flew past my head as I was stalking an Orange Tip butterfly: it looked like one of the smaller bumblebees – Bombus hortorum maybe – but it wasn’t moving like a bee. Deflected from the butterfly I followed it to rest, and got enough clear photos to be able to identify it from my hoverfly bible – the ID then being confirmed by the UK Hoverflies people on Facebook.

Eriozona syrphoides is a European species which isn’t common anywhere in the UK; it was first reported here in Wales in the 1960s, and has spread to the north of England and parts of Scotland, but is scarce through the Midlands and south of England. In fact it’s probable that if I’d reported it through iRecord instead of directly to UK Hoverflies, the record would have been auto-flagged as improbable. As you can see it’s one of the better bee mimics among the hoverflies, looking perfectly capable of defending itself – whereas in fact it’s quite harmless, unless you’re one of the aphids on which its larvae feed; the adults feed on nectar from a variety of plants such as scabious and heather.

It would be fair to say that I’m feeling mildly smug about this record.