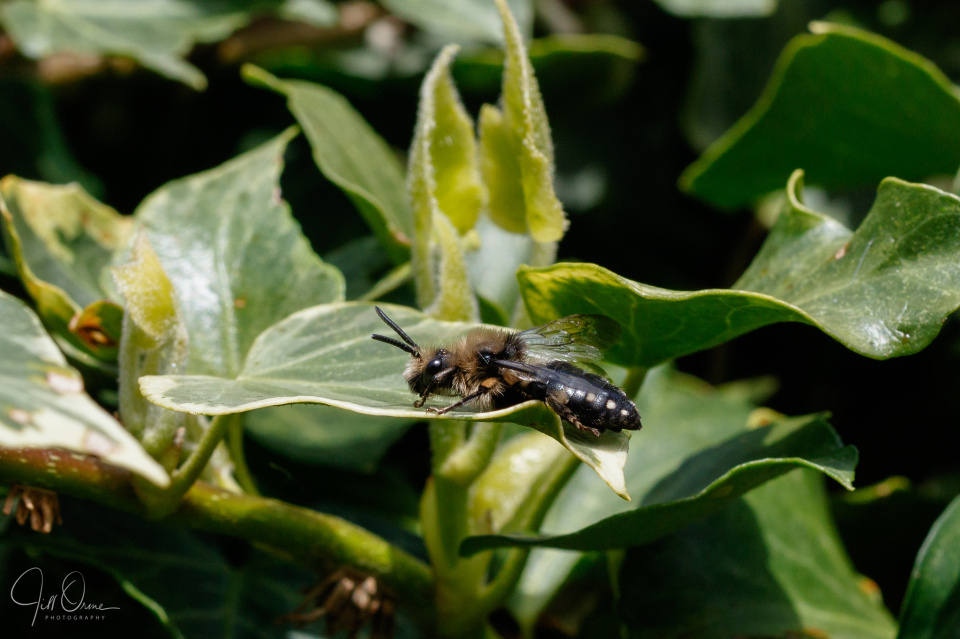 After a brisk morning walk around Croome, R and I spent the afternoon working in the garden. It was warm and sunny – too hot, in fact, for some of the heavy tasks we’d set ourselves – and suddenly there were insects everywhere, which gave me plenty of excuses for downing tools and picking up the camera. This evening I’m bringing you two of the finds that especially pleased me.

This is a male common mourning bee, Melecta albifrons, which is a cleptoparasite of the hairy-footed flower bee. They’re usually said to fly from April to June, so this is a relatively early emergence, though it’s not the first time I’ve photographed them in late March. I spotted several today, including one jet-black individual; the melanic form isn’t uncommon, but I’d never seen one before. The females, which seem to emerge a little after the males, lay their eggs in Anthophora plumipes burrows, and their larvae eat the food supply left for the A. plumipes larvae by their mothers. As you know I adore hairy-footed flower bees, so I’m a little conflicted when it comes to Melecta albifrons, but they clearly have their own niche within the ecosystem so I try not to be overly emotional about them. The females live down to their criminal reputation by being hunched and ugly, but I think the males are handsome, in a rather saturnine way. 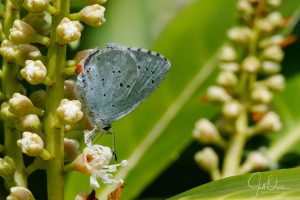 My extra is a first brood Holly Blue butterfly, feeding on laurel, and is another early sighting: this species overwinters as a pupa, and according to UK Butterflies would be expected to emerge “as early as the first week of April in a typical year”. I’ve never previously photographed one before the middle of April. I can’t definitively state the sex of this individual, because it declined to open its wings to show me its overwing markings during the several minutes I was stalking it; but the very curved shape of the forewing makes me think that it’s a female.