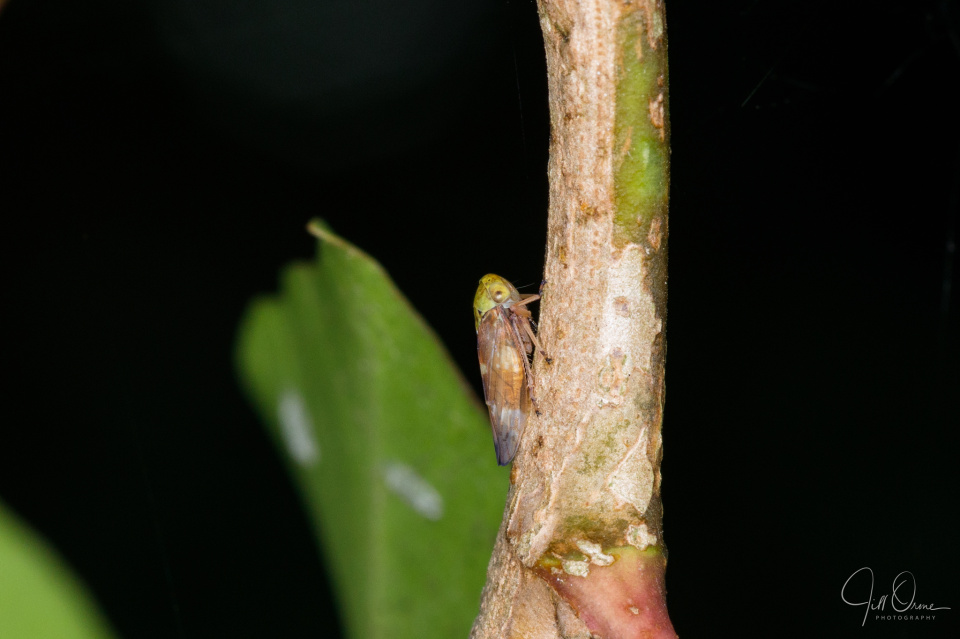 I thought you might like to see the leafhopper from Thursday’s blip now that it’s developing its adult colouration. I was told at the time by a bug person over on Facebook that it was teneral – that is, newly-moulted and therefore soft and pale – but I confess that I doubted this assertion, not least because when I saw it again on Friday it looked exactly the same. However, when I searched the ivy again today, there it was, and it turns out that I owe my informant at least a mental apology for having doubted him.

The same person told me that it was probably one of the Idiocerus species, which I really want to be true because it’s such a very good name. However, if it is true, my chances of getting a definitive identification for the little chap aren’t very good: the excellent British Bugs site states, “Leafhoppers in the Idiocerinae are large and often highly patterned, with a very broad, short vertex. The group is large and often very difficult to identify.” Personally I’d take issue with the word ‘large’, though obviously this is a highly relative term – I haven’t actually measured it, on account of it having a fit of the vapours if I even get close enough to take its photo, but I’d guess that it’s less than 5mm in length. When I introduced R to my new friend later in the day, his response was something on the lines of, “That is very small!”.

Largely because it was extremely windy and therefore highly unsuitable for macro work, I managed to be quite temperate today, photography-wise, taking less than twenty images in total, about half of which I’ve deemed worth keeping. If I could manage a few more days like this, I’d be able to spend a great deal less time than I currently do sitting at my desk, dealing with all the files. Anyway, I’ve put this and my other two favourite shots of the day into a little post on Facebook, if you’d care to see them.