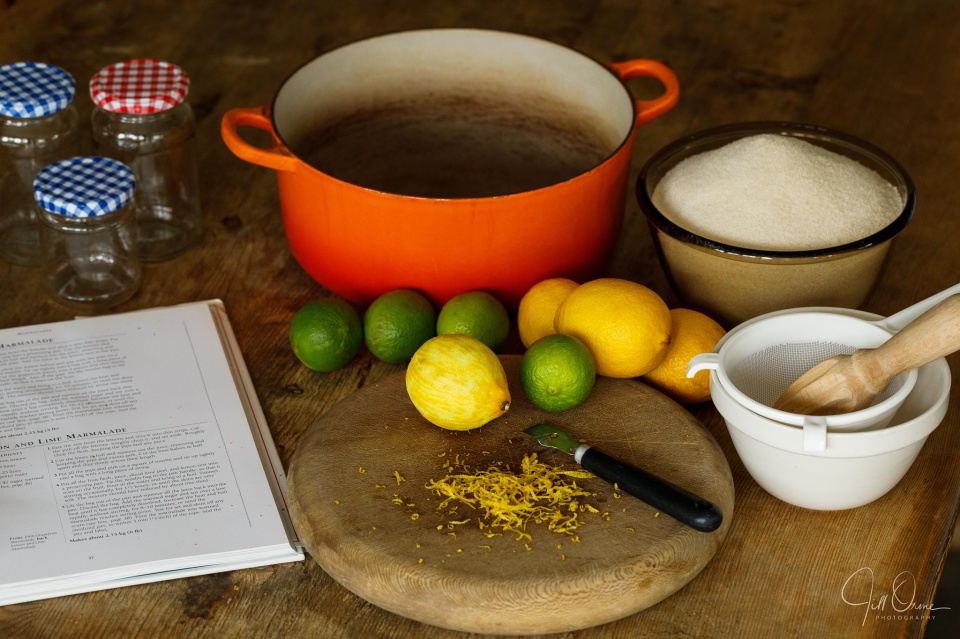 When the Seville oranges appear in the shops after Christmas, I usually make one or two batches of marmalade. One year I got a bit carried away and made three. Last winter I opened the store cupboard, glanced inside, saw some Kilner jars, and decided that I was still in surplus and didn’t need to make any; but on being plaintively approached by the Man of the House recently about an apparent dearth of marmalade, I discovered that I should have checked more carefully. The jars in the cupboard turned out to contain a rather strange gooseberry jam which I made when we had a glut, and hadn’t managed to persuade any of the family to take off my hands – and there was, indeed, no marmalade.

It being but a few months (Brexit permitting) until the Seville oranges come round again, I didn’t want to waste my time making any old orange marmalade, so today R and I made some lime and lemon – although I have to say that to call this marmalade is to be generous. If ‘extra jam’ is a preserve with a fruit content greater than 45%, this might best be categorised as ‘lesser marmalade’. Sugar marmalade with lemon and lime flavouring would be even more accurate.

I feel I should point out (lest you think I have him chained to the cooker) that R’s contribution to the process was the brute force and ignorance element whereby the fruit peel is separated from its pith – assistance for which I was more than grateful. All the technical stuff involving measuring, simmering, dissolving sugar, boiling, testing, and bottling, fell to me; I therefore have no-one else to blame for the fact that after I’d finished with the marmalade I had to deep clean the entire kitchen to remove all the citrussy splashes and splodges, and prevent me sticking to every surface I touched.

At dinner time a couple of quite scary thunderstorms went directly over the village, along with the kind of rain you generally only see in travelogues about monsoons. At the time the weather forecast was telling us that we were enjoying a pleasant evening, with a light breeze and only a 15% chance of rain, so heaven alone knows what it’ll be like by Wednesday, when we’re said to be due a moderate breeze and some heavy rain. If I persuaded R out into the garden tomorrow with a spade, I could end up with a third pond….