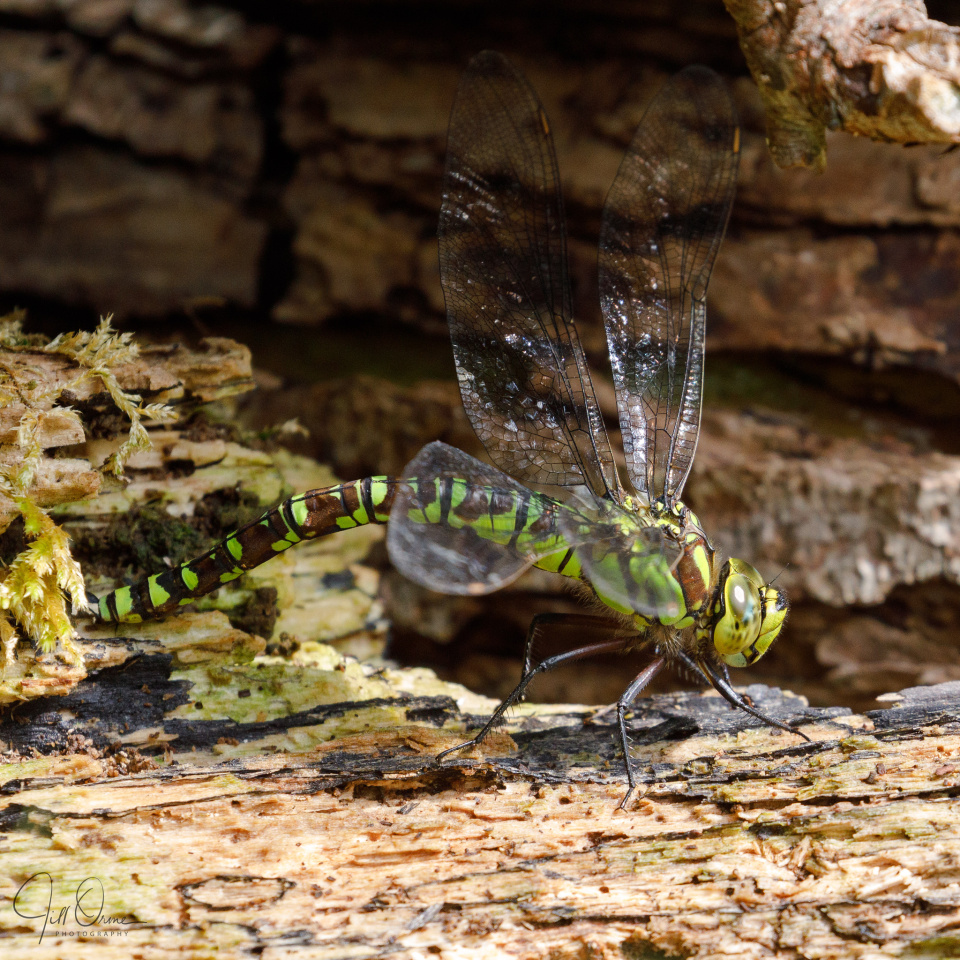 As it was a warm and muggy morning, I wandered down to the wildlife pond in the hope that some more damselflies might have arrived and taken up residence. None had, but as I was walking around the perimeter trying to find a good angle from which to snap a hoverfly, this Southern Hawker rose out of the log pile with an irritated clatter of wings, and flew around me for several seconds before settling back down to continue laying her eggs. I apologised, of course, for having disturbed her, and she graciously allowed me to photograph and film her at work. I daresay I’ll get bored with watching this activity eventually – maybe in about a decade – but at the moment it fills me with excitement and wonder every time I see it happening in our garden.

I’m not sure which Southern Hawker this is – she’s definitely not Luna because there are no spots on her frons, and she’s also not Three, the female who oviposited yesterday, who was missing a claw; but her thoracic markings don’t look quite right for Blue either. It would seem remarkable in this very small village, with its generally quite poor population of dragons, for four different Southern Hawker females to have found and chosen to lay at our tiny pond, but I suppose it’s possible.

It would be an interesting exercise for the rest of the season to try to get decent identification shots of all the SHs using our wild garden, so as to be able to say definitively how many there are. That’s not as easy as it sounds though, because you need images taken from the same angle and in similar light to be sure of depicting the slight variations in markings between individuals, and dragons aren’t generally keen on being posed.

While I ponder that little problem, please accept a rather wobbly film I made of this female, and which I’ve posted to Facebook. In my defence I was using the big camera and a lot of lens, which isn’t all that easy to hold steady for half a minute. If I’d known that my visitor was going to stay around for a good quarter of an hour, I’d have gone back to the house and fetched a tripod.