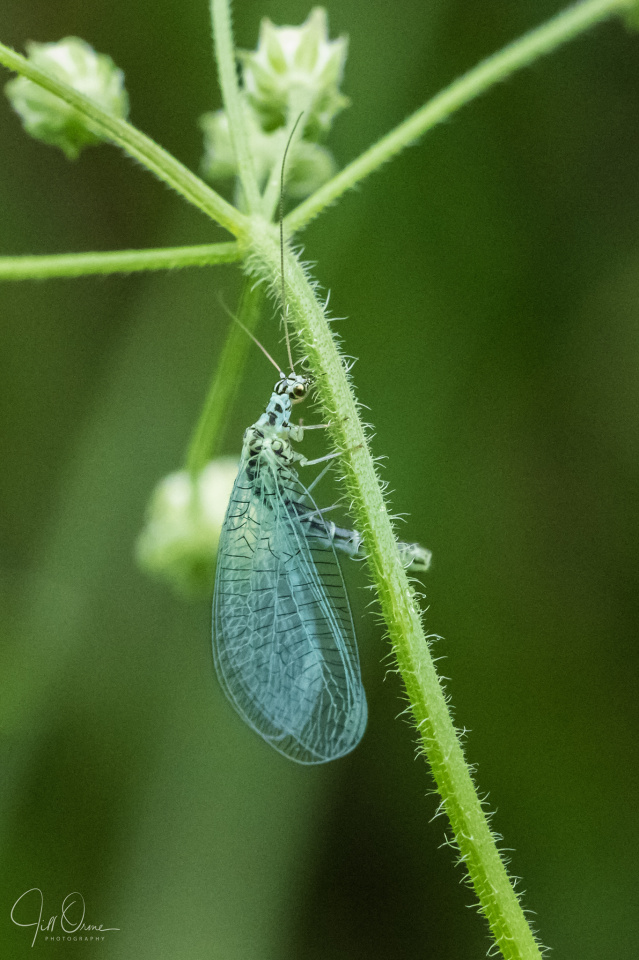 R and I went for a walk today at Kemerton Lake Nature Reserve, which makes the bold claim on its web site to be one of the two best sites in Worcestershire for dragonflies and damselflies. Admittedly it was an overcast and murky afternoon, but it was quite warm and humid, and I was hopeful that we might spot some dragons – but in the event, all we found were damselflies, mostly tenerals, and many of them too immature to be easily identified. The lake was also rather bizarrely free of bird life, and as R conspicuously does not have my high level of tolerance for sitting in hides, gazing at stretches of water on which absolutely nothing interesting is happening, we didn’t stay long.

What we did see in quite good quantities were lacewings. This is an insect of which I’m very fond – I like their pale aqua colouring, and their mad, metallic eyes – but they’re not the easiest things to photograph, especially in poor light, so I was quite pleased with the way this shot came out. Lacewings are wonderful things to have in your garden if you happen to be plagued by aphids, because both the larvae and the adults are carnivorous (though the adults will also take nectar). You can even buy lacewing larvae to apply to your roses as a pest control measure, though I don’t know how effective this is; personally I tend to take a “live and let live” approach to garden pests, and allow things to find their own balance, which is why I have the kind of garden that no-one ever suggests should be opened to the public to raise money for charity.

According to the Wildlife Trusts, there are 14 species of green and 29 species of brown lacewing in this country, on the wing from spring through till autumn, and some at least attempting to hibernate through the winter. Sadly for my iRecord tally I won’t be able to record the ones we saw today, because they can’t be identified to species from photographs.