Standing out in the cold, dank murk this afternoon, arms aching from holding up the weight of the camera and lens to shoot above me, trying not to shiver beyond the capacity of the image stabilisation to compensate, and to distinguish between tiny darting birds and tiny trembling leaves, I took just shy of 140 shots, and kept…. six files. Two of which you have here: this sweet little long-tailed tit, which surprised me by being out and about on its own, when they normally hang out in bickering groups; and in extras a goldcrest – probably the same one as I found (by accident) on Friday, as it was working a hedgerow just a few yards from the spot where I took those photos. 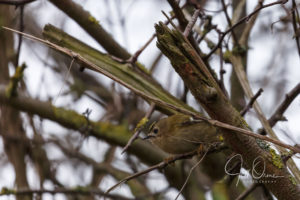 I was intently pursuing the goldcrest when a couple of of my neighbours appeared with their dog, and peering up into the hedge, the distaff half asked me if I’d found a wren. “No,” I replied, “it’s a goldcrest.” “Oh, lovely!” she said. “We had a little flock of them in the garden the other day. Right by the back door. I called D to come and look, because you don’t often see them as clearly as that.” “Really? Wow! How wonderful!” I replied through gritted teeth, looking around for something sharp to bang my head against, and resisting the temptation to jump on my camera. It’s taken me six decades to come across a single goldcrest, and now I find that round here they’re as common as…. sparrows. “I’ll expect to see your photo in the newspaper next week!” she said as they left.

I appreciate the kind sentiment, but I don’t think so. Only two of my goldcrest shots were keepers, and they’re still not great, but at least they’re an improvement on Friday’s: I managed today to catch the vivid crest that gives the little chap its name. There’s a rumour that the weather may become brighter (and colder) over the next few days, and if that happens I will persevere with Project Goldcrest, in the hope of nailing a good photo; these tiny birds seem to be unperturbed by the presence of humans (at one point today I lost track of this one, only to have it whizz past my head and land just in front of me), so I’m happy that I can stalk it without disturbing it from the essential business of finding food.