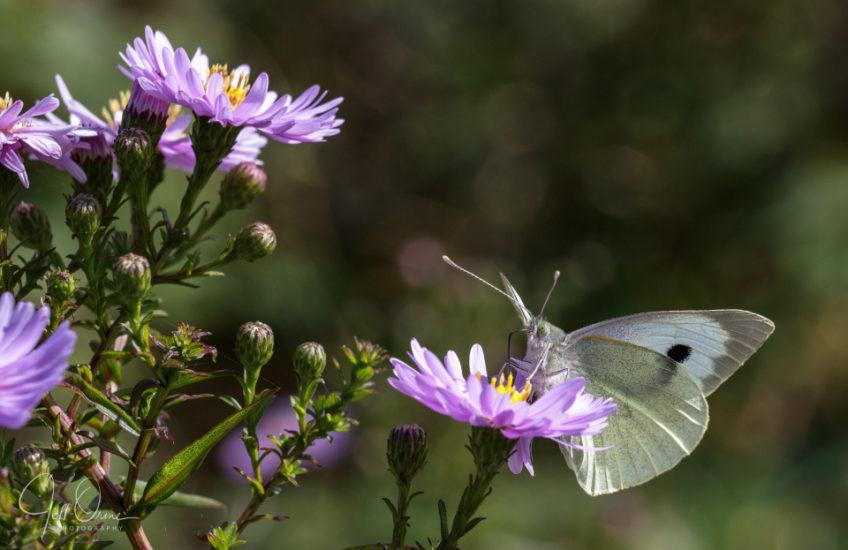 Well, on a day in the middle of summer when you can happily chase round after skippers, and blues (various), and the meadow is full of Marbled Whites and Small Tortoiseshells, and – oh look! – is that a Small Copper over there?; or you can take a trip out in search of a Grayling, or one of the fritillaries or hairstreaks….. then yes – cabbage whites are a bit boring. And of course, people who grow their own brassicas hate them.

But in the middle of September, when the sole butterfly to be found in the now shabby and overgrown field you still can’t quite stop referring to as the butterfly meadow is this surprisingly fresh Large White, feasting on a patch of naturalised asters…. well then, they’re rather charming. Even though they do have slightly mad eyes.

Large Whites normally have two broods per year, the second emerging in July and flying through till early September; their larvae would be expected to be looking for sheltered sites round about now, in which to pupate for the next seven or eight months before emerging next April or May. The fact that this adult is so fresh suggests there has been a third brood this year – which surprises me because it’s been my impression that we’ve had a pretty poor summer. But I know who to consult about the butterfly year and I will make enquiries.

Many thanks for the very positive response to yesterday’s blip – I’m grateful for all the nice comments, stars and hearts.