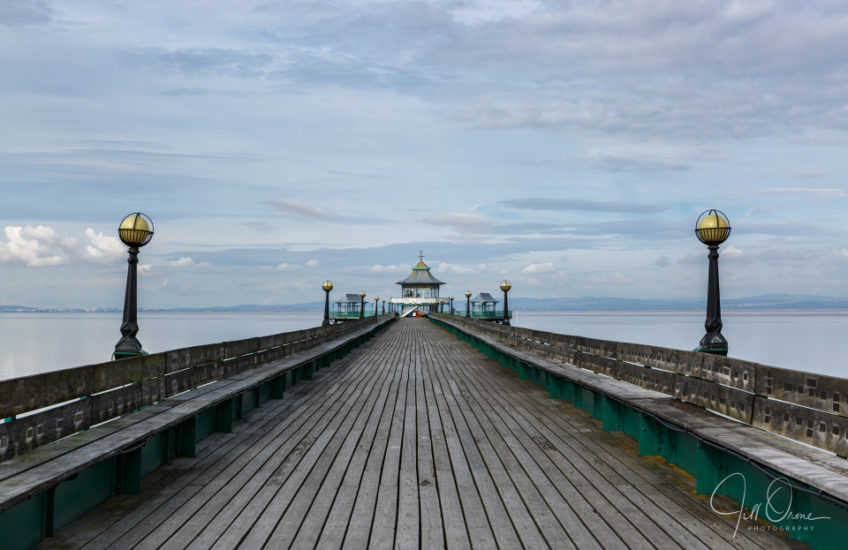 I spent the day in Somerset, taking part in a long exposures workshop at three sites on the coast: Clevedon, Burnham-on-Sea, and Weston-super-Mare. It was a pretty long and intense day, but huge fun, and I learned a lot. Not least, that I’m going to have to invest in a filter system pretty soon…

Because of the type of work we were doing, and the way our tutor, Andy, taught us to take our time and be considered and methodical in the way we composed and set up our shots, I didn’t come home with a gazillion files – but a quick pass through the 200 I did take (some of which, to be fair, were bracketed sets of three) has shown me that I have some nice images, and that I’ll need to put quite a bit of time and attention into culling and processing to find the best ones and bring the most out of those files.

Which is one reason why I’m blipping this shot, which I took before the workshop started – the other being that I’ve fallen headlong in love with this pier. Andy lives fairly close to me, and very kindly offered to let me ride with him rather than driving myself to Somerset and back; because he wanted to arrive at the rendezvous in Clevedon with plenty of time to spare before the start of the workshop, I had time to take a stroll while he was working, and as I knew that we were going to be featuring the pier in our compositions I thought that it would also be fun to walk along it and take some shots on and from the structure. They charge something like £3.20 per adult for access – though I gave them £4 because I couldn’t be bothered to hang around while they asked the necessary questions to claim back the Gift Aid – and I think it’s worth every penny. I’m sure there will be times when it’s crazily busy, but while I was there there were literally seven other people and a dog on the entire pier, which gave it this rather mysterious sense of abandonment and isolation (though you can, if you look full-screen, see two of the other people, and the dog). There is a tea place, and a restaurant (which would be a stunning place for dinner on a night with a nice sunset), and you can even hire the pier for weddings – which I’m definitely going to do the next time I get married. The water here obviously isn’t the open sea, though it can apparently be rough in bad weather, but the Severn Estuary; the strip of land in the distance is the eastern edge of Wales, and the city you can make out to the left of shot is Cardiff.

I’ll post some more photos of the pier when I’ve been through them properly, but if you’re interested you can find out more about it here and here. The workshop I did was this one. I wonder if I could persuade R that he might enjoy a 3-day photography holiday on the Yorkshire coast….?!