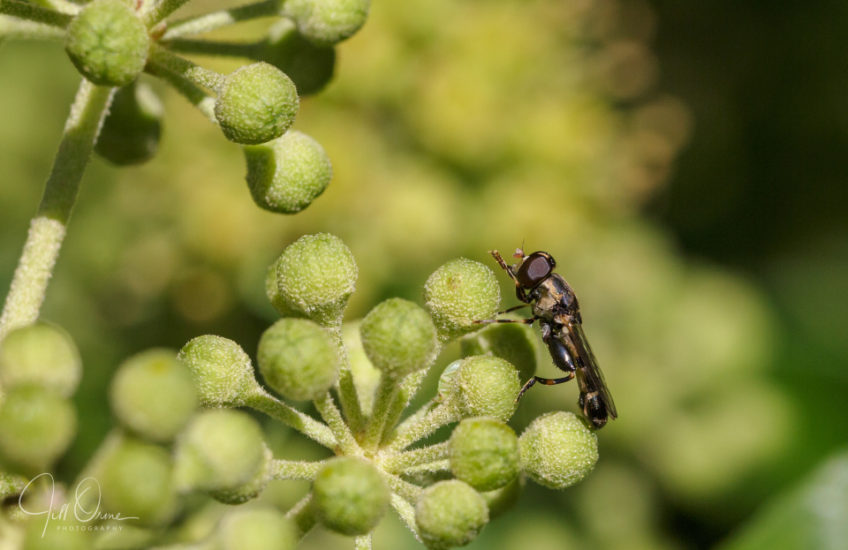 After an overcast and miserable morning, the sun suddenly burst through in the middle of the afternoon, and within minutes the ivy hedges around the village were all literally humming with bugs. As well as scores of honey bees I found several ivy bees (including my first female of the year), a couple of species of bumblebee, a couple of interesting flies which I need to have identified, numerous wasps including some Ectemnius, several Red Admiral and Comma butterflies, and some nice hoverflies, including the Zonaria and Volucella I blipped last week – probably the same individuals as they were in almost exactly the same place. I was also relieved to find several 7-spot ladybirds: last year was a really good ladybird year, and I recorded several species I’d never seen before, but this year has been dire up till now. A Hawker also clattered past my head, hunting along one of the hedgerows, but unfortunately it didn’t come to rest so that I could get a photo.

This is Syritta pipiens, which I always think sounds like a 1980s pop band, but is in fact one of the smaller hoverflies. It’s extremely common, but easily overlooked as it’s only around 1cm long and very narrowly built, though both sexes have those dramatically enlarged rear thighs. Males are highly territorial, but this is a female, performing her toilette among the ivy buds; I can never quite decide when I see this behaviour if the fly is cleaning its legs against its tongue, or scraping pollen off the proboscis with its forelegs – either seems equally possible.

When I first spotted the extra something lurking behind the ivy bud I wondered at first if it was a crab spider, but during the whole series of photos I took of the hoverfly it seemed to be trying not to draw attention to itself, and I think it was more probably some kind of nymph.