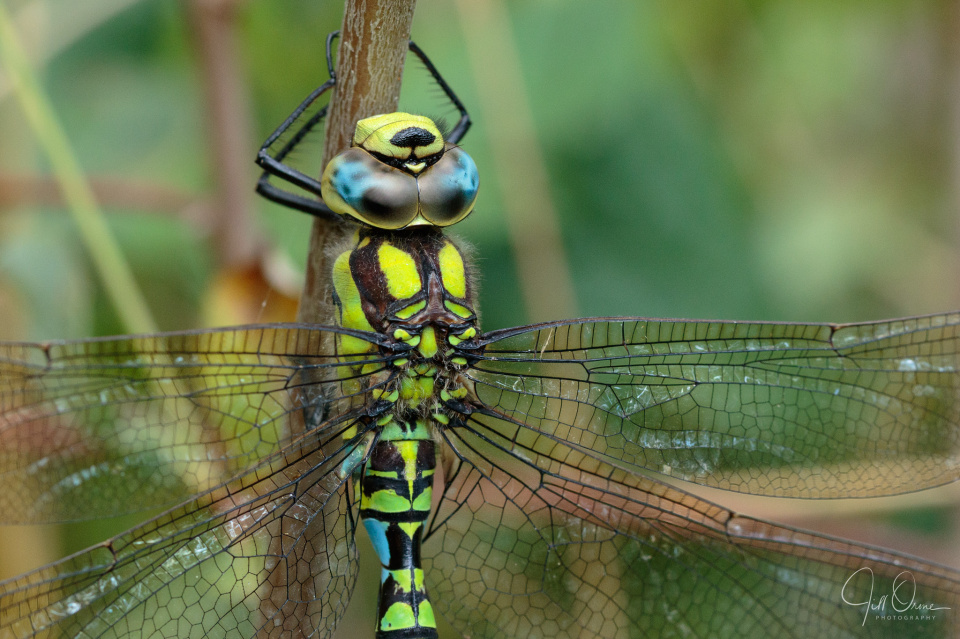 I took a trip to Trench Wood this morning, where I bumped into a couple of people I know (though not Hillyblips, who was rumoured to be around the place somewhere), but failed to find the hummingbird hawkmoths that were my principal target. On the plus side, I saw my first Painted Lady of the year. This species migrates northwards each summer from Southern Europe and North Africa and arrives here in variable numbers, and it has been thin on the ground this season, so I was pleased to tick it off my list.

By the time I reached the pond the cloud was building up, and I didn’t really have the light for capturing dragons in flight – but that didn’t stop me spending quite a lot of time and expending a large number of shutter clicks trying. I did manage a handful of keepers, but none of them pleases me as much as this portrait of an extremely obliging Southern Hawker, who unexpectedly took a break from hunting around the scrub at the back of the pond, and perched a short distance in front of me. I approached him slowly, taking photos with the long lens every couple of steps, until I was close enough to change to the macro; and then gradually moved closer and closer until I was kneeling down right next to him. Although the background is annoyingly messy because the scrub was too close for good separation, I’m pleased with the focus here, and I’d love you to look at this full-screen, if you have the time.

Whenever I’m playing the photographic equivalent of Grandmother’s Footsteps with an insect, I find myself wondering what they think about the whole palaver. Some are obviously frightened: grasshoppers, for instance, are horrified when you approach them because they expect to be eaten, and will use whichever of their only two defence strategies is available at that moment; if you’re lucky they freeze and try to become invisible, and if you’re not, they leap away. Others barely notice you if you move slowly, because they’re busy working: for example, most female bees are approachable while they’re collecting pollen, provided you don’t draw attention to yourself, but if you distract them they tend to react quite sharply and zoom off somewhere else.

Dragonflies, though, are pretty inscrutable. You can’t creep up without them noticing – those wrap-around eyes given them nearly 360° vision, so they always know you’re there. And it’s certainly possible to startle them – especially the smaller ones, which are in greater danger of becoming someone’s lunch than the big chaps like my friend here. But my sense is that they’re primed to respond to rapid movement, and the slower your approach, the less likely they are to react. Sometimes while you’re stalking them they see something more interesting than you, such as a fly, and suddenly lift off to intercept it; and sometimes they appear to decide that enough is enough, and take themselves off to where they can be alone. But sometimes, like today, they just stay where they are, apparently relaxed, watching you approaching, until you find yourself close enough to reach out and touch them. Not that I tried to touch this one – it would have been rude after he’d let me take so many photos – but the knowledge that I could made me catch my breath.