I love the Ashmolean Museum in Oxford: it’s bursting with interesting objects, sliced and diced into neat collections that are themed by age, or place, or by the type of thing – in this case, a room full of old musical instruments. These four guitars, reading from left to right, were made by:

If you didn’t know that Stradivari made guitars, you’re not alone, because I didn’t either. On the other hand, despite having lived with a guitarist and a burgeoning guitar collection for over three decades, what I do know about guitars could be inscribed in magic marker on the back of a 50mm lens. “It’s strange that they’re mostly five-stringed,” said R. “Why is that strange?” I enquired, trying and failing to sound intelligent. He drew a careful breath and explained patiently that the modern guitar is (usually) a six-stringed instrument – though to be honest, he could have saved himself the trouble: I’ll have forgotten again by tomorrow.

By the way, the lovely curly detail at the bottom of the Voboam is called a moustache bridge, and the Stradivari apparently also had one of these originally  – at which time the frets would have been made of gut wrapped around the neck, rather than these later metal ones. The Sellas and Voboam both have spectacular backs – I’ve put in a photo as an extra. 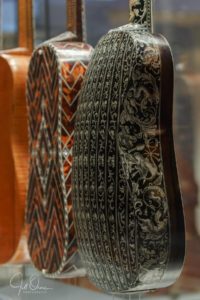 We’d gone to the Ashmolean this morning to see a couple of free exhibitions of some of their Italian Renaissance drawings – which to my mind were not worth having got up early for, though I think R may have got more from them than I did. They certainly didn’t hold us up for long, and we therefore had quite a lot of pre-lunch pottering about time – which I think is the ideal way to enjoy this museum, rather than trying to see the collections in any kind of ordered way.

After lunch we went for a stroll, and then returned to the Ashmolean to see their exhibition America’s Cool Modernism, which is a truly awful title for a show I thoroughly enjoyed, and would recommend if you’re in the vicinity. There are a couple of decent O’Keefes, and some haunting Hoppers; but also some works I loved by artists of whom I’d never heard, such as Charles Demuth; and some nice photos by Imogen Cunningham and Paul Strand. I much preferred it to the Italian Renaissance.

On the way home R could hardly have failed to sense me fidgeting as we drove through the Cotswolds, and he kindly offered to swing round via the owl field; but I martyred myself and declined – a decision I’ve been kicking myself for ever since.