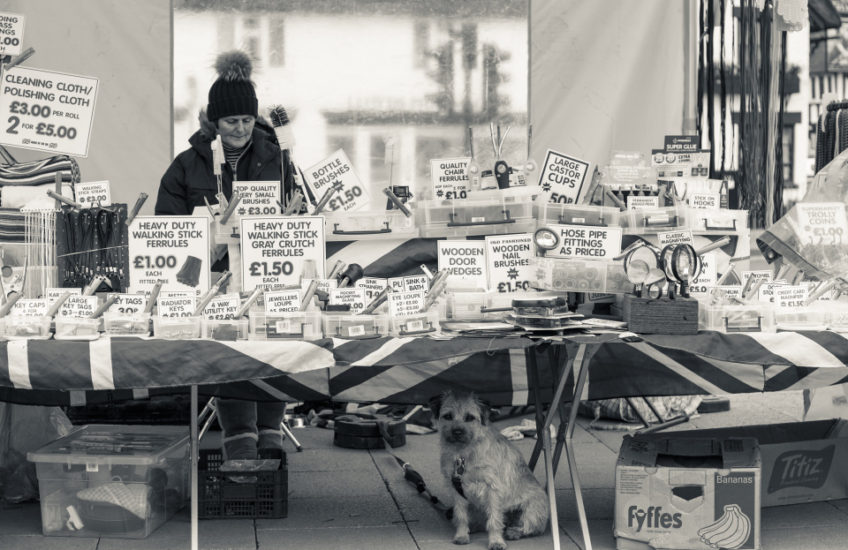 It’s a well-known fact that if you have ferrules that need guarding, there’s nothing better to employ than a Border Terrier. You can see how keenly I was being watched here, as a potential ferrule purloiner. I thought that getting any closer to the ferrules than this might be pushing my luck, so I left at this point, empty-handed.

R and I were walking back to the car when I spotted this scene, after a very satisfying lunch at Boston Tea Party. Physically satisfying because eggy bread topped with bacon, avocado and cherry tomatoes is jolly good; and emotionally satisfying because while we were there I took an unexpected call from Child Two, wanting to know if by any chance his father and I were in Stratford and able to rendezvous with the Boys on Tour. They were en route from Somewhere Up North to Somewhere Down South, and H was hoping that we might relieve him of some of his luggage for the next few days – which we duly did, while hearing about how the last few gigs had gone. They were looking surprisingly well, given the fairly punishing schedule they’ve been following, and it was very nice to see them.

This reminds you that I forgot to post their most recent cover video, which they recorded while staying with us. I really must wax the kitchen table.