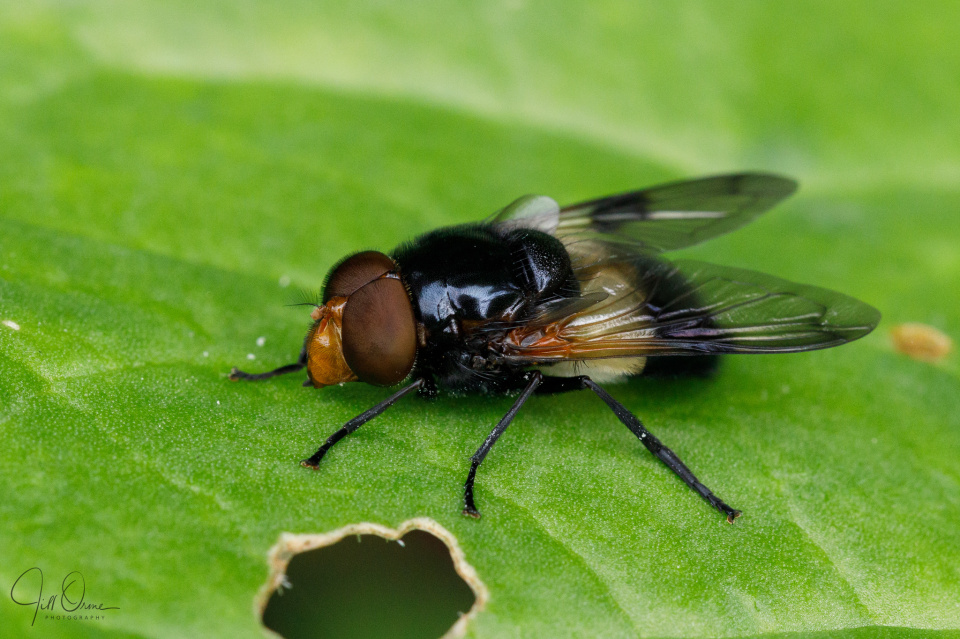 A dreary morning gave way to a better (though patchy) afternoon, at which point R and I took ourselves off to Stratford for errands, cake, and a river walk. I was very happy to find at least twenty Banded Demoiselles on the vegetation around Lucy’s Mill Bridge, but less pleased with my photos: because my main errand earlier in the afternoon had been the lengthy and tedious business of trying on and buying jeans, I was travelling light, with just one camera and a macro lens in my bag, and the damsels were new and flighty and kept a safe distance away from me, so I didn’t achieve any really worthwhile portraits.

So instead I’m offering a photo I took in the garden at lunchtime, of the first Volucella pellucens I’ve seen this year. I love the Volucellini – they’re great big boldly-marked hoverflies, which you really can’t miss even when you’re having a dozy kind of day. Though they look a little fearsome they’re totally harmless – and indeed, so unequipped for conflict that the biggest problem in dealing with them is that they tend to flee at the first suspicion of human attention. To which I would say: if you don’t want human attention, dress a little more conservatively.

While the other members of this genus are quite obvious mimics of bees and wasps, it’s a little hard to see what Volucella pellucens is pretending to be, its appearance being pretty much unique among insects (there are a couple of other black and white hoverflies, but they’re smaller and less distinctive than this). Given that it invades the nests of social wasps to lay its eggs you’d think it would be better served by black and yellow markings, but rather surprisingly it seems that the wasps rarely attack this intruder, suggesting that they either don’t notice it, or instinctively know that its effect on their colony is beneficial. The V. pellucens larvae act as scavengers within the wasp nest, living on dead adults and grubs, and thus helping to keep the nest clean and free of disease. Once they’re fully grown they leave the nest and pupate in soil below.