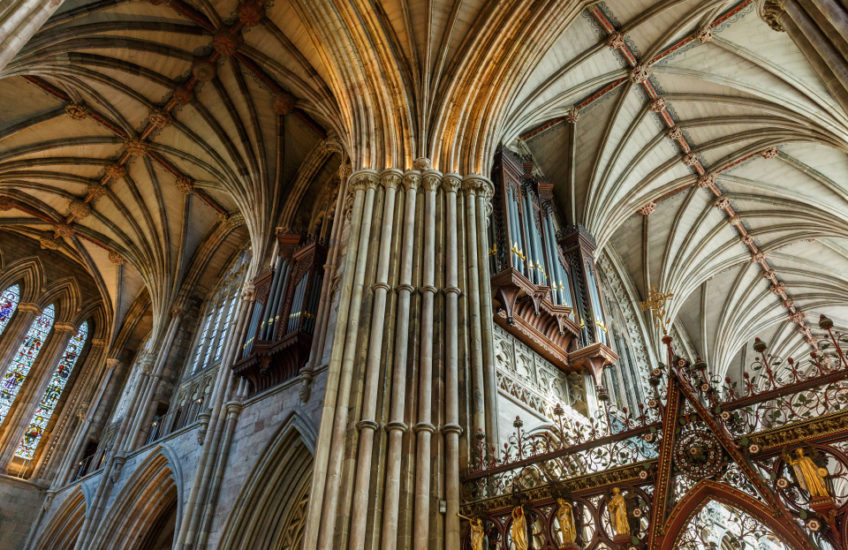 I do, as you know, like a bit of Gothic. This is the junction between the North Transept (to the left) and the Choir (to the right) of Lichfield Cathedral, showing some of its fine fan vaulting, as well as the organ and part of the choir screen. Lichfield is the only mediaeval English cathedral with three spires, which you can see in my extra – and also the remarkable, heavily carved West Front, which causes this building to be categorised as Decorated Gothic. The outline of the cathedral put me in mind of La Sagrada Família in Barcelona – though I’ve no reason to think that Gaudi was inspired by what was at one stage of the Middle Ages the third most important church in England, after Canterbury and York. 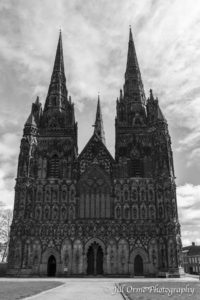 R and I stopped at Lichfield this morning en route to Rowsley in Derbyshire, where we’d arranged to meet R’s aunt and uncle, and take them out for lunch. The trip from home to Lichfield was very straightforward, and after our tour of the cathedral we still had (we thought) plenty of time in hand; so we took a little walk around the town (largely Georgian, and very pleasant), and then enjoyed a decent coffee in an unusual but rather cool café called the Faro Lounge. So far, so nice day out.

Sadly the journey from Lichfield to Rowsley started badly and got worse, culminating in us trying to turn onto the A6 and discovering that it was closed. Literally closed. The main A6. Unbelievable. By this stage the whole thing had started to feel like a nightmare – or possibly the John Cleese film Clockwise, which I only managed to sit through once because it felt like watching someone’s nightmare – and the fact that we arrived at the restaurant a mere quarter-hour late was due to a combination of lucky cross-country route guesswork by me, and some hair-raising rally-style driving around Dovedale by R. To a soundtrack of me bellowing into my mobile, “Yes, lunch! We’re late, but we’re on our way! Could you please tell… hello?… yes, I can… HELLO! Yes, I can hear you! Can you hear – hello? Yes, I’m still here – could you tell Mrs H… HELLO?? Oh, never mind.”

Anyway, we did make it, just before the restaurant was due to close, and had lunch and a nice chat; after which our guests went off to the opera in Buxton, and R and I pooled our skill and ingenuity to navigate homewards while outwitting the satnav’s determination that we should use the A6. What fun we had! By the time we got back I was more ready for bed than anything else; I have a set of shots from Lichfield, but to be honest I can be bothered with them now, so I’ll post them on Facebook tomorrow.