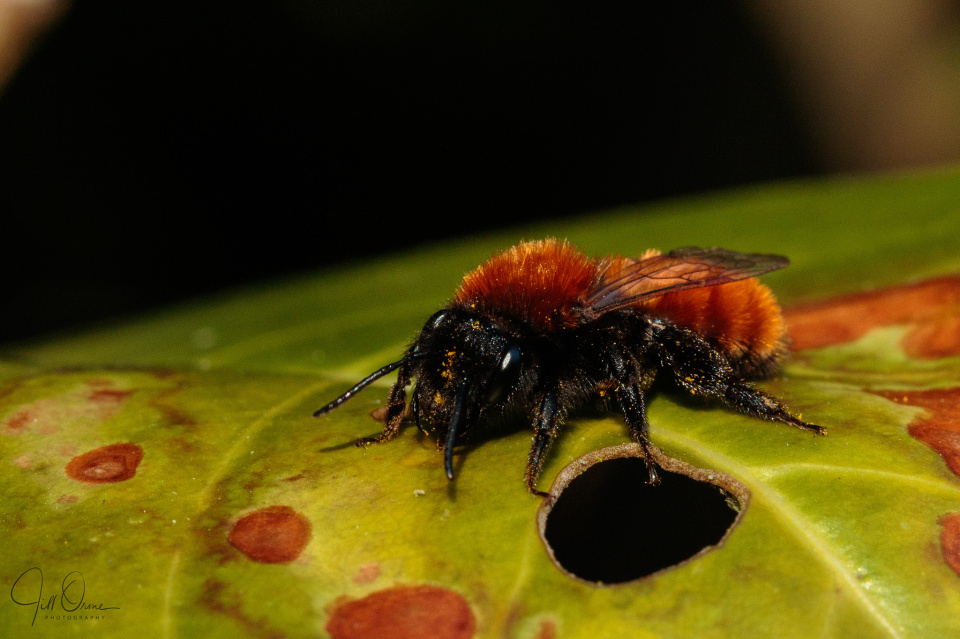 Bee of the day: Andrena fulva, the tawny mining bee.

The honey bee sized females are absolutely unmistakeable – I spotted this very fresh specimen from about five metres away, and knew immediately what she was. The males are much harder, being brown and a bit scrawny, but they do have very pale, bristly faces, as you can see on this photo by Stephen Falk, so a useful rule of thumb is, if it puts you in mind of Einstein, it’s probably a male A. fulva. There’s quite a good information page on the species here, if you’d like to know more.

I’ve been looking carefully for one of these bees for the past few days, because they always seem to emerge in my garden during the last week of March. I spent quite a while today recording invertebrates around our property, and on every circuit I checked this laurel hedge because it’s a favourite basking spot for many different bees, wasps, and hoverflies – but it wasn’t till my final trip round at the end of the afternoon that I found her, so I think she’d emerged during the afternoon. I also looked hard for a male, but without success; I’ve only managed to photograph them a few times, because as well as being unobtrusive they have a very short flight season, dying after they’ve found a female and mated. The females live longer because they each have to dig and provision a nest, so I expect to be seeing them from now until at least the middle of May.

But for the lush and plush Andrena fulva, my post would probably have featured the Peacock butterfly which obliged me with a photo opportunity earlier in the afternoon. I’d failed several times to get a lens on a male Brimstone, which was frantically quartering all the back gardens along our stretch of lane in search of a female (if he’d been prepared to take some advice from me he could have slowed down a bit and conserved his energy, because the the females never emerge this early), but the Peacock was much more cooperative. After drifting past me in quite a lazy manner, he settled for a rest on some debris on the bank of the brook that forms the far boundary of our garden, and waited until I’d tiptoed up and taken his photo before setting off on patrol again.

This evening I did my two circuits of the village alone (which was significantly more boring), because R had taken his permitted exercise at a canter early this morning. But I did see bats again, which was nice, and heard the tawny owl calling from the farm up the hill. And tonight there were definitely two little owls – one yelling its head off from the orchard across the road from our house, and the other answering from a field on the other side of the village.