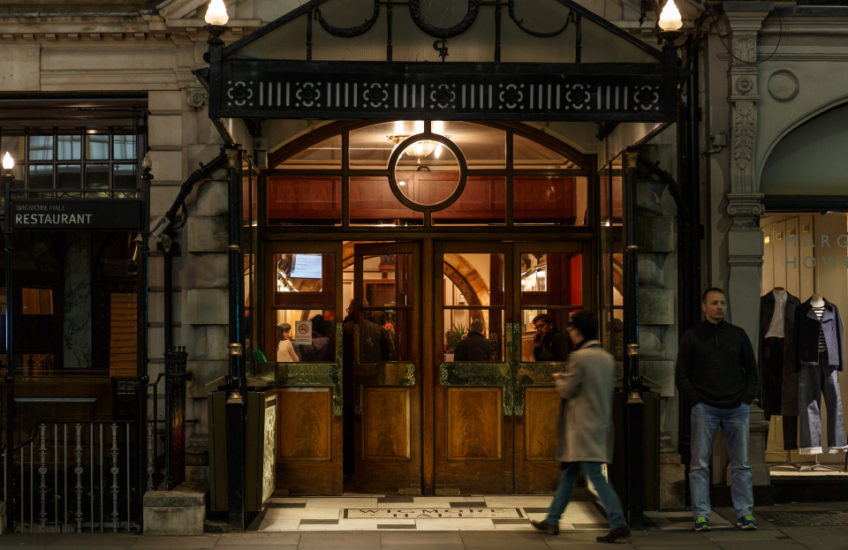 You know how it is: some days are better than others, but most lie within the realms of the ordinary, and over time merge with the mass of material within your memory banks – so that without a blip journal to check back on, you’d be hard-pressed to say what you were doing on a particular day, or whenabouts a particular thing happened. But then…there are some days that you just know are going to stay with you for as long as you have your faculties, which you hope will be long enough to let you see your as-yet unborn grandchildren roll their eyes at hearing the story for the umpteenth time.

This afternoon R and I took a train down to London, and after a sunny stroll through Marylebone, a pleasant drink at 108 Brasserie and an excellent (if unusual) meal at Le Relais de Venise, we walked on to the Wigmore Hall to hear a solo concert by the American musician Chris Thile. Words like “star” and “genius” have been overused to the point of losing much of their force, but this man is both of those things, as well as being probably the best mandolin player on the planet; he’s also charming, funny, self-deprecating, and surprisingly political. As I tweeted to him afterwards, I’ve been going to gigs regularly since about a dozen years before he was born, but I’ve rarely, if ever, been to one as joyful and life-affirming as tonight’s – and if you love music, and your tastes can encompass a journey from bluegrass through to classical, via a little jazz and with the odd rock cover thrown in, I can only urge you to track down one of his gigs and go to see him: I promise you will not regret it.

Highlights from the gig – which I should point out was not only performed solo, but unamplified in the amazing acoustic of the Wigmore Hall) included:

My Oh My
Bach’s D minor Partita (all five movements, spread through the course of the evening)
Julep
Another New World (which made me actually cry)
Falsetto

… and so much more – I’m sure that when R reads this he’ll say “Why didn’t you mention so-and-so?”, but I’m trying not to exhaust your patience with my fan-girl gushing. Really – just go and see the man. The next time he’s playing this country I’ll be climbing rough-shod over anyone who gets in my way, knees and elbows flailing, to make sure I get a ticket.