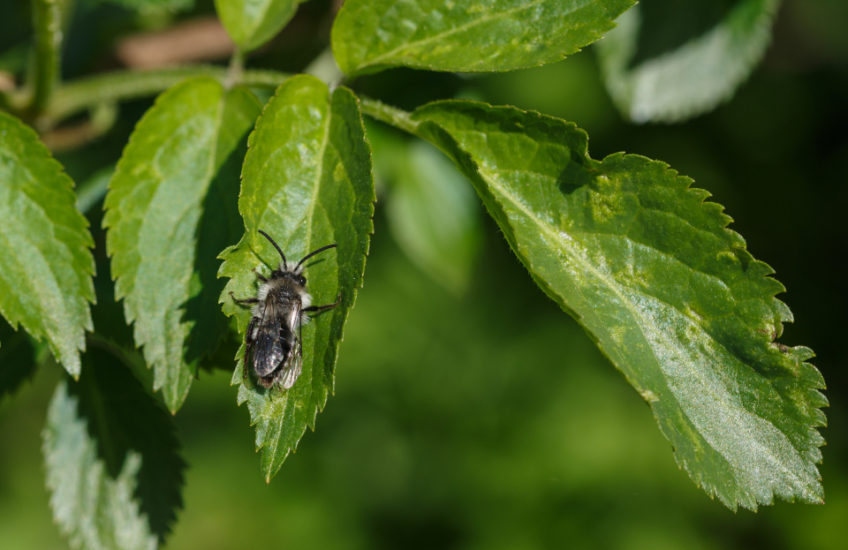 I didn’t sleep well after the excitement of our London trip and the Chris Thile gig, and woke tired and fractious, and very unenthusiastic about the prospect of singing Poulenc in front of an audience. R and I started the day with errands, followed by coffee and lovely cake at Boston Tea Party; and then I swanned off out with my macro, looking for bugs. I found so many that I took nearly 300 photos, and only stopped hunting because I had to go over to Chipping Campden for final rehearsal.

This is Andrena cineraria, the Ashy Mining-bee – supposedly on the wing from April to June, but this chap clearly hasn’t received the memo. And I think it is a chap, rather than a chappess – the sexes are similar, but the females have a much shinier abdomen and it’s the males which have that extravagant tuft of hair on the face. They dig burrows in the ground, and although they’re not aggressive towards humans, my experience is that they’re very territorial towards other bees: I’ve seen them chase away other solitary bees, and even much bigger bumblebees, from the area of their nests. I like the way this one is braced for the off against the elder leaf, with his wings already beginning to spread – the instant I moved the lens back a few inches, he was gone.

The extra photo is of a beautiful female Andrena fulva, the Tawny Mining-bee, catching some rays on a leaf of our laurel hedge – which was covered in basking solitary bees and wasps today. Though I know that it’s a good place to find them, I usually regard the photos I take there as being purely record shots because the laurel itself isn’t very attractive, but this little red bee is just so gorgeous that I couldn’t resist posting her. She and her sisters also spent quite a lot of time showing the bigger bees how easy it is to feed from a gooseberry flower when you’re only about 1cm long, but sadly I didn’t manage a good image through the tangle of stems. 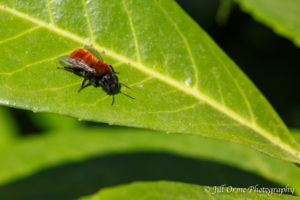 This evening I’m surprised and delighted to report that the concert went very well indeed (supporting my lifelong thesis that the things you spend the most emotional energy fretting about tend to turn out OK, and it’s the unexpected things you haven’t been worrying about that really knock you flat). We rocked the Vivaldi Gloria (you know you’re doing it right when the conductor’s smiling), scrambled only slightly haphazardly through the Britten, and pretty much nailed the Poulenc – and in my book, pretty much nailing something as difficult as Poulenc’s Gloria counts as a win. One of the tenors said to me afterwards, in a tone of astonishment, “That’s the best I’ve ever sung that!” – and I think almost anyone in the choir would have said the same thing. And any deficiencies in the choral sections were very much made up for by our two lovely soloists and brilliant organist, so I’m confident that the audience had a good time. Next term we’ll be doing Purcell’s Dido and Aeneas, and I’m already beaming at the thought of that.