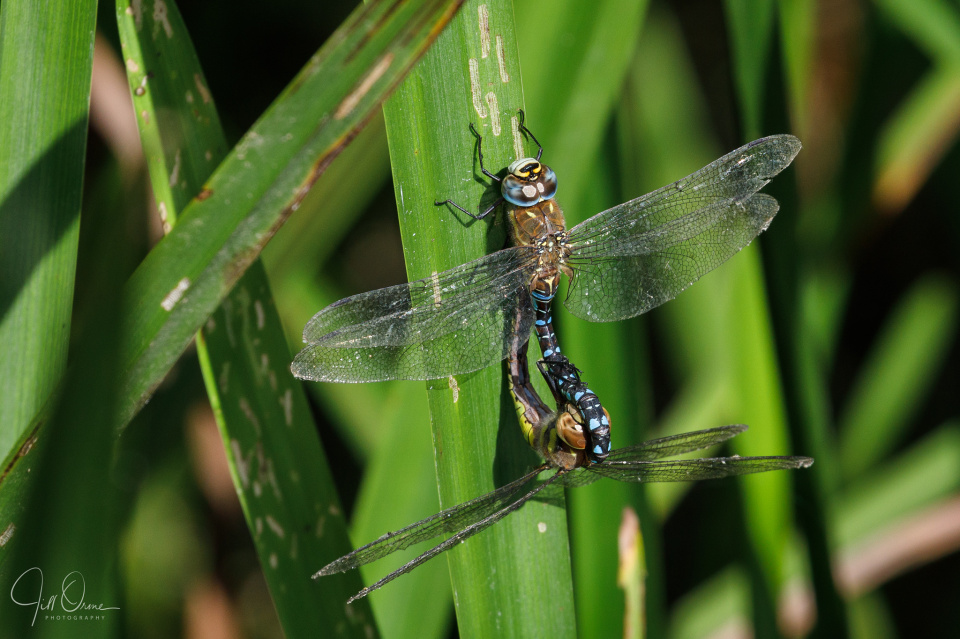 When I reached the lake at Croome this afternoon there was a chap standing on the bridge, peering down onto a patch of reeds at the junction with the river. As I approached, he produced a small camera from a pocket and began taking photos, so I paused and waited for him to finish.

“Oh good,” I replied. “That’s what I’m here for.” And then, as he pointed, and I turned my own lens in the right direction and saw what he’d been photographing, “Lovely. Those are Migrant Hawkers.”

And thus I met in person for the first time Mr Mike Averill, Worcestershire County Recorder for the British Dragonfly Association, a man with whom I’ve been in regular correspondence for about the past five years – most recently last week, when I discovered contractors doing a major reed bed clearance at Croome, and fired off an immediate email to him about it.

We stood on the bridge, getting in everyone else’s way, for about twenty minutes, discussing reed clearances, and Odonata sites in Worcestershire and elsewhere, and what a weird season this has been, especially by comparison with last year’s bumper summer. And then he went off to complete his survey, and I went off to look for more photos.

In the event I didn’t take anything I liked better than those copulating Migrant Hawkers, though I did spot one or two other things that were of interest, and if I find the time later in the week I may put a few of them on Facebook. For tonight though, there is one extra: a pair of Ruddy Darters ovipositing in tandem. It’s not the best photo I’ve ever taken, but I’m going to forgive it its deficiencies for two reasons: firstly, it’s genuinely quite hard to capture these guys ovipositing, because they’re small, fast, and erratic, and the male tends to flip the female up and down at speed to encourage her to drop her eggs; and secondly, it shows a couple of eggs emerging from her vulvar scale. 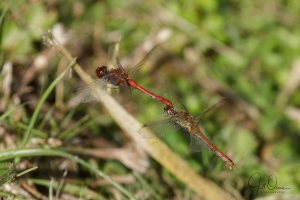 Female damselflies and hawker dragonflies all have a scythe-shaped ovipositor, which they use to cut into the plant material in which they precisely position their eggs. Female Golden-ringed Dragonflies also have an ovipositor, but it’s long and straight, and they use it to push their eggs into the silt of stream beds. All other female dragonflies – chasers, skimmers, darters, emeralds, and clubtails – have a vulvar scale, which is a kind of chute via which they expel their eggs. In most cases the dragon flies over her chosen stretch of water and repeatedly dips the end of her abdomen, washing away the eggs as they emerge from her vulvar scale. Ruddy Darters are different though: the male selects an oviposition site, which may be over submerged plants, but is very often a metre or more inland from the water’s edge, and then with his help the female simply flings her eggs around, to land wherever they may. The eggs are drought-resistant, and won’t begin to develop until they’re either washed into the water by rain or submerged by rising water levels in the winter, and by keeping away from the water surface the Ruddy Darters make themselves less vulnerable to predation by frogs.