“Teneral” describes the state of the imago (adult stage) of an insect immediately after moulting, during which it’s soft and its colouring is pale and immature. I’ve chosen to feature this close-up view of what I think is a female Broad-bodied chaser because I think it shows quite well that her exoskeleton and wings are still soft; but I’ve added R’s favourite shot of her as an extra, and there are eight other photos here, if you’re interested. 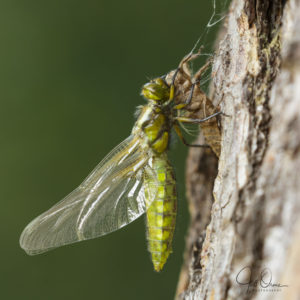 We were strolling around the lake at Croome this morning, stopping every few yards so that I could check the reeds for emerging dragons and damsels, when a very nice man came over and said (quite diffidently) to R that he could see I was photographing wildlife, and if it was of any interest, there was a newly-emerged dragonfly on a cedar tree “just over there”. Forgetting that I’m quite old now, and was fairly precariously balanced on a steep piece of bank with my head down at knee level, clicking away at something that had just caught my eye, I snapped upright, spun round, and leapt nimbly up to the path. “Where?” I enquired (trying to seem friendly and enthusiastic, but probably looking more like a rabid Rottweiler), and before the poor man had finished his directions was off down the path at an extended trot.

So here’s the thing. Dragonfly larvae live in water for anything up to five years (though two is much more common), but when some combination of environmental factors triggers an urge within them, they climb up out of the water, and transform into adults by breaking out of their larval skeleton. Often they do this on a handy reed, but any firm surface to which they can cling will do, and it’s not unknown for them to go a few metres away from the water. But this one got herself out of the lake, up the bank, across a gravel path, across another stretch of grass, and then up this cedar tree to a height of nearly two metres off the ground before deciding that she was in the perfect place – and that seems quite mad to me.

At this stage she is entirely helpless, and has to stay still, clinging onto her old larval skeleton, until her new skeleton and wings have hardened enough for her to fly; this is a process which can take several hours, and obviously in this state she’s highly vulnerable to predation. So while a south-facing surface like this is probably a good instinct, sitting at head height on a tree trunk with birds flying past every few minutes doesn’t seem like the best idea: I just don’t think she thought it through rationally.

Luckily for her chances of surviving her first day out and about, a fairly steady stream of humans were walking up to the tree and peering at her, which was keeping the area clear of other creatures. Whether or not that carried on until she was strong enough to fly, I can’t say – left to my own devices I would probably have stood guard over her all afternoon, but I try reasonably hard not to exhaust R’s patience in situations like this, so after taking no more than a couple of gazillion photos, I reluctantly but firmly walked away.