It would have been Demoiselle day if I’d been quicker off the mark, because demoiselles trump damsels on sheer beauty. But though they’re easier to spot, on account of looking a bit like large, exotic butterflies in flight, they’re also tricksy, and the single male I spotted at Brandon Marsh this morning zoomed past me and up into a hawthorn tree, before I’d done more than think Oh! That’s a Banded Dem–

Thwarted in the Demoiselle Department, and also in my quest for dragons, I consoled myself by finding damselflies – and jolly small they are, when you’re out of damsel practice after a long winter. The only ones that were about today were blues, which all come in at about 3cm in length, and most of the ones I found were highly skittish, and preferred to put a couple of metres depth of nettle bed between themselves and my lens.

This one – which I’m pretty sure from the markings is a teneral Azure Damselfly – was what you might describe as a captive subject, having unwisely landed on an old spider web from which she lacked the strength to free herself. I know that you’re not supposed to intervene in situations like this: it’s all about survival of the fittest; other creatures need to eat, and she’d have provided an easy meal for a bird or a dragonfly; etc., etc…. but I intervened, OK? Shoot me.

I didn’t want to risk damaging her by touching her, but I used the corner of my handkerchief to break the section of web that was tethering her to this stem, and she responded by dragging herself along it until she could pull her abdomen free, and then fluttered weakly to a leaf a couple of metres away. If you look at the extra you’ll see that she was still trailing strands of web, and you might also be able to make out the fact that her abdomen had become bowed in her struggle to free herself – which is why I couldn’t get all of her within the plane of focus. As she was still in the process of hardening, it’s possible that she might have straightened out after I went away and left her in peace, but I think it’s more probable that she’ll be slightly bent for the rest of her life. If so, it’s unlikely to incommode her. 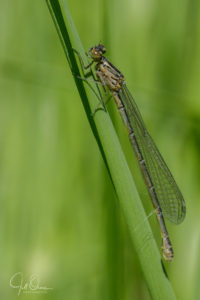 I’ve put a few photos of a male Brimstone desperately courting a female, and being firmly rejected, on my Facebook page, if you’re interested.