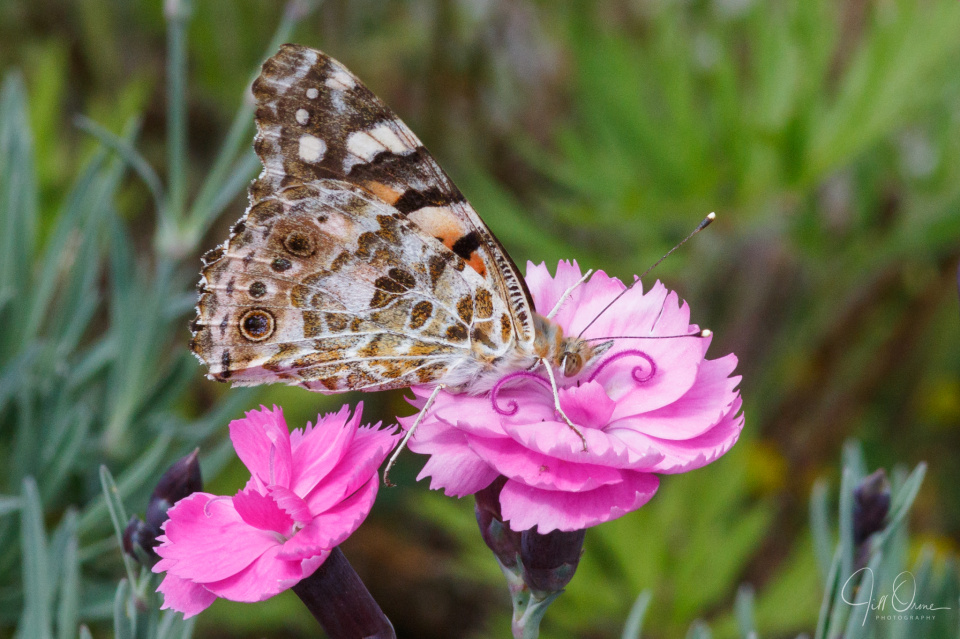 I walked the village this afternoon in search of interesting invertebrates, but it was a dull day and there wasn’t much around. Consoling myself with the recollection that I’d photographed several nice hoverflies in the garden before going out, I wandered back home – only to have the sun and the inverts emerge just as I arrived. I was heading for the drift of hedge woundwort in the top garden which I’m currently monitoring for wool carder bees – mug of tea in one hand, and camera in the other – when there was a great flurry just in front of me, as I inadvertently put this Painted Lady to flight. These pinks are growing in an old Belfast sink on the patio, which is too close to the house for the comfort of most butterflies, so I hadn’t been expecting or looking to find one there as I walked past.

Painted Ladies are large butterflies, with a wingspan of up to three inches, and they’re built for long-distance migration, so they’re strong and fast flyers. Other than their excellent camouflage, this strength and speed are their main defences against predation, so it you upset one it tends to go off like a rocket. Or in this case maybe a Catherine wheel: the butterfly zoomed round and round the patio, and up and down the back wall of the house, while I rotated like a spinning top to try to keep it in view. Eventually it came back down on the pinks, but as soon as I took a step towards it, off it went again. This time I applied some intelligence to the situation, and while the Painted Lady was whizzing around I walked down onto the lawn, put down my mug of tea (which promptly tipped over) and the 5DIV and macro, and picked up the 7DII, which was wearing a long lens. Thus it was that the next time my victim landed, all I had to do was find a sight line and blast away. Over the next half hour the butterfly and I did reach a sort of understanding, as you’ll see if you take a look at the extra, which was taken with the macro during one of its rest periods between feeds, when it tended to move to some kind of hard, reflective surface to bask. 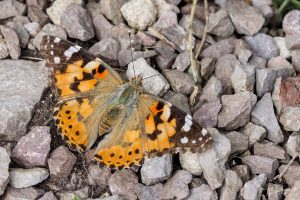 The Painted Lady is the most widely distributed butterfly species in the world, found on every continent except South America and Antarctica. They originate in the tropics, from where they migrate in spring to more temperate regions, and to where it’s now believed they return in the autumn. The number of butterflies migrating in any given year depends on the resources available in their home range, but in some years it’s believed to be many millions of specimens. European Painted Ladies originate in North Africa, and in a good year can spread as far as Iceland.

The Painted Lady is unique among butterflies in breeding continuously throughout the year, and it’s believed that this is what allows it to achieve its spectacular long-distance migrations – imagine a rolling succession of generations, spreading out from North Africa in the spring and then back there in the autumn. Breeding isn’t in any way synchronised: each female will mate and oviposit whenever she’s ready, and wherever she happens to be. Females are not fussy about larval foodplants for their offspring, though they favour thistles where these are available, and they lay large quantities of eggs, possibly compensating for their rather random choices of oviposition site.

There’s no evidence that the Painted Lady has ever survived a British winter, but the entire point of its peripatetic life cycle is that it doesn’t have to: by the time our weather turns cold, the butterfly will be back in warmer climes. The fact that British specimens migrate south in the autumn was confirmed by research undertaken in 2009, and nicely reported here. From its colour my new friend isn’t very old, and from the state of its wings I’d say it hasn’t travelled far to reach our garden, so it was probably bred locally. It’s interesting to speculate which generation it might represent in the posited six-generation migration cycle for 2022. 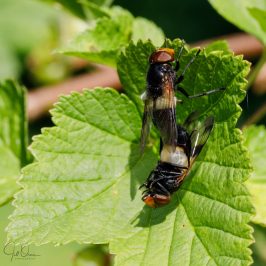