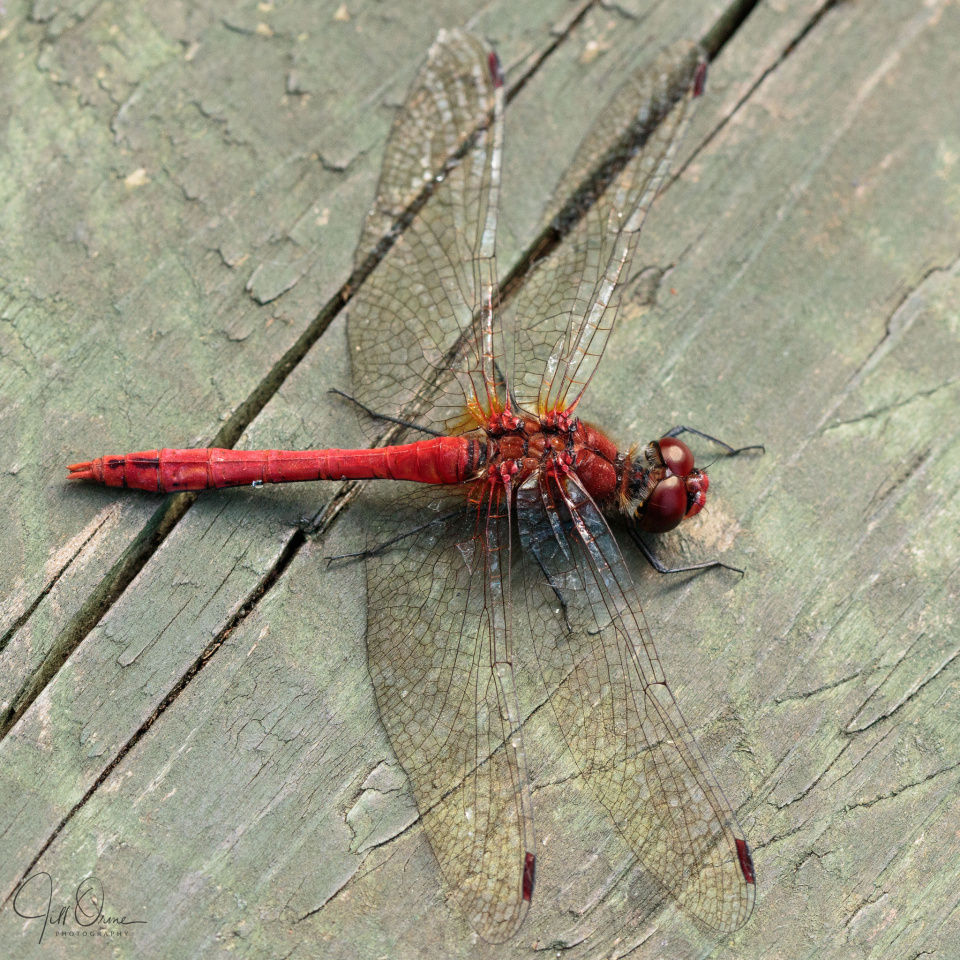 I have closer, side-on views of this Ruddy Darter, but there’s something about the contrast of colours and textures in this shot that I really like. It would have been even more pleasing if I could have manoeuvred myself right over the top of him and taken it absolutely parallel to the bench, but I didn’t want to push my luck: he let me take multiple photos, although he seemed quite irritated by having just been caught in a short sharp shower and kept wriggling about trying to clean water droplets off himself, and I feared that me looming right over the top of him would be the final straw that caused him to up and leave. Please do look at this full-screen, if you have the time – you should be able to see some of the droplets he hadn’t been able to reach.

After a busy but boring morning, I zoomed up to Trench Wood again for the last hour of play, where I got rained on twice, but had fun with the dragons, and also had the unusual pleasure of hearing both tawny and little owls calling in the woodland. I wondered (because the light was improving and the Southern Hawkers were just coming out to play again) whether the Powers That Be really would close the gate at 4.30pm, but discovered, when I reluctantly but dutifully went back to the car park, that yes they would – a chap was sitting in his own car, with a very pretty little Shih Tzu guarding him against the car criminals and flashers, waiting for me to leave so that he could lock up. It’s very sad that antisocial types have started to target nature reserves, and I can’t wait for them to forget about Trench Wood again so that normal service can resume for the rest of us.

This evening I went to the first choir rehearsal of the new season, and discovered that I like John Rutter more than I thought I did – leastwise his Winchester Te Deum, which has some absolutely lush harmonies. So that was nice. And the Government had an even worse day today than they did yesterday, which was highly entertaining: they can’t apparently govern with the House of Commons that they’ve got, but aren’t being allowed to dissolve it to try to get a more amenable one – which may not be quite what they meant when they said that we needed to leave the EU so as to be able to control our own lawmaking. Mwahaha. Oh – and, while crunching through last week’s raw files I found this, which also made me pretty happy.