Today I made my first attempt at photographing fishing ospreys… and oh my days, is it difficult! I learned a lot though, which I hope will make things easier when I make a return visit to the Horn Mill Trout Farm later in the season. I also gained a whole extra level of respect for people like Hillyblips, who manage to make the taking of this type of image look easy.

I drove up to Rutland Water this morning, and spent an enjoyable couple of hours at the Lyndon Reserve, where the Rutland Osprey Project is based; two of their hides afford a reasonable view of one of the nest sites, currently occupied by a female they call Maya and a male numbered 33, who have bred successfully for the past three years, and are currently incubating three eggs. While I was there I spotted a courting pair of great crested grebes, and took some photos which I’ll process and post to Facebook as soon as I can.

Then I went to the trout farm, where I’d booked a hide place for the afternoon session. Sadly the weather was quite poor by this time, with heavy cloud and occasional rain showers, and in consequence the light was terrible. I’d like to tell you that the light was the only reason I failed to capture a spectacular fishing shot, but I have to be truthful and say that quite a large measure of incompetence went into it as well. 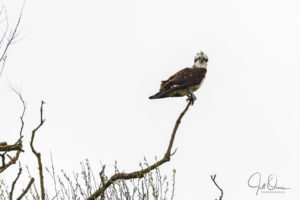 The handsome 8-year old male bird in my first extra, simply called 28 because of his ring number, made four dives into the trout pool while I was there, but on the first two neither he nor I captured anything: on the first run I tried to track him down from this tree, lost focus and couldn’t get it back again, and on the second he hit the water very close to the hide and at the opposite end to where I was sitting, and by the time I realised where he was it was too late. The main photo is from his third dive, and the second extra is of him pulling up out of the water after his fourth and final dive of the session; by this time it was almost dark, I was shaking with cold, and my nerves were in shreds, so when our “spotter” called the hide and asked if we’d had enough, I was happy to say that I had. 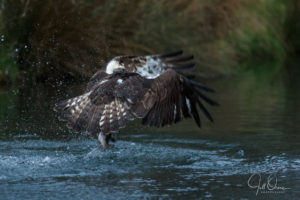 The final extra is of an attempted mugging: the red kite came down and collected a dead fish that had been dropped beside the trout pool before we arrived, and was carrying it off for its own supper, when the crow swooped in and began hassling it – presumably in the hope that the kite would drop the fish again. For several seconds the two of them raced in and out of the branches of a willow tree, with much swearing and waving of talons, but in the end the kite managed to keep its grip on the prize and make off with it. 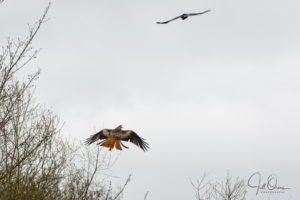 When I arrived home and R asked how the day had gone, I explained about the light, and my skill issues, and the slightly irritating fact that because of the wind direction today all of 28’s fishing runs went away from the hide rather than towards it – and he laughed and said “Bird backsides”, referring to me telling him (only slightly bitterly) the other day that if I had £5 for every photo in my files of the disappearing backside of some bird of which I’d utterly failed to capture the front end, by now I’d probably be able to afford a new camera body and a Very Big Lens Indeed. Which is true, but with a bird this big on a pond this small, a VBLI really wouldn’t have helped. What I need for snapping ospreys are better eyesight and faster reactions…. so I think I’d better start saving up now.