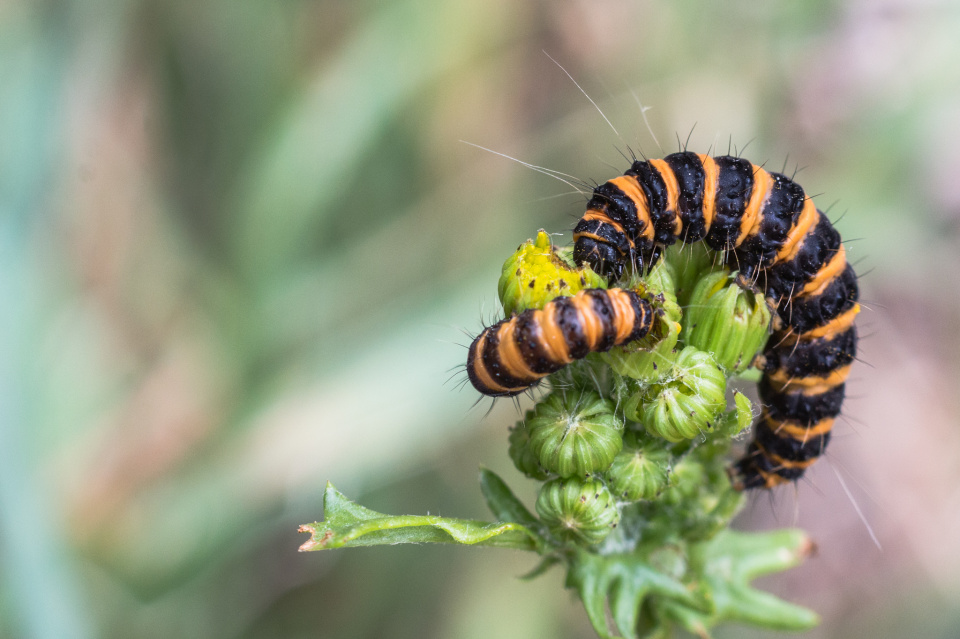 A couple of times in the past few weeks I’ve seen something in the village that looked like a black and red butterfly, but which research suggested was probably a Cinnabar moth (Tyria jacobaeae). Then I saw a photo of the caterpillar in chrisA’s journal, along with the information that it eats ragwort.

Ever since then I’ve looked for Cinnabar caterpillars at every opportunity (and I’ve had plenty of those because the stuff gets everywhere – including my garden), but I couldn’t find any. And then this morning I was walking the dogs along a path that cuts past an orchard in the centre of the village, glanced down as I passed a couple of scraggy ragwort plants, and was very excited to see about a dozen small, striped caterpillars munching away. One was actually in the process of splitting and shedding its skin (grotesque but fascinating), but by the time I’d exercised the dogs, fetched my camera and walked back it had completely sloughed the old skin and gone back to eating.

Given that ragwort is highly toxic to horses and cattle, and remains so even dried in hay, cinnabar moths are a Good Thing. In fact, I believe that they’ve been deliberately introduced in New Zealand, Australia and the USA specifically to control this weed. The caterpillars absorb the ragwort toxin, which makes them very unpalatable to birds – a fact that they flag up via this extravagant colouring.

The larger caterpillar in this shot was perhaps 2cm long, and the smaller one half that size. They were the only two on this particular plant, but you can see the amount of damage they’re doing to it. The more I looked, the more infested plants I found along the length of the path, some stripped almost bare. I also looked quite hard for an adult moth, but sadly didn’t manage to find one; I’d thought of going to look again at dusk, but as it’s now cold, windy and trying to rain I doubt there will be much activity this evening.

This was taken with the 31mm extension tube on the 85mm lens.