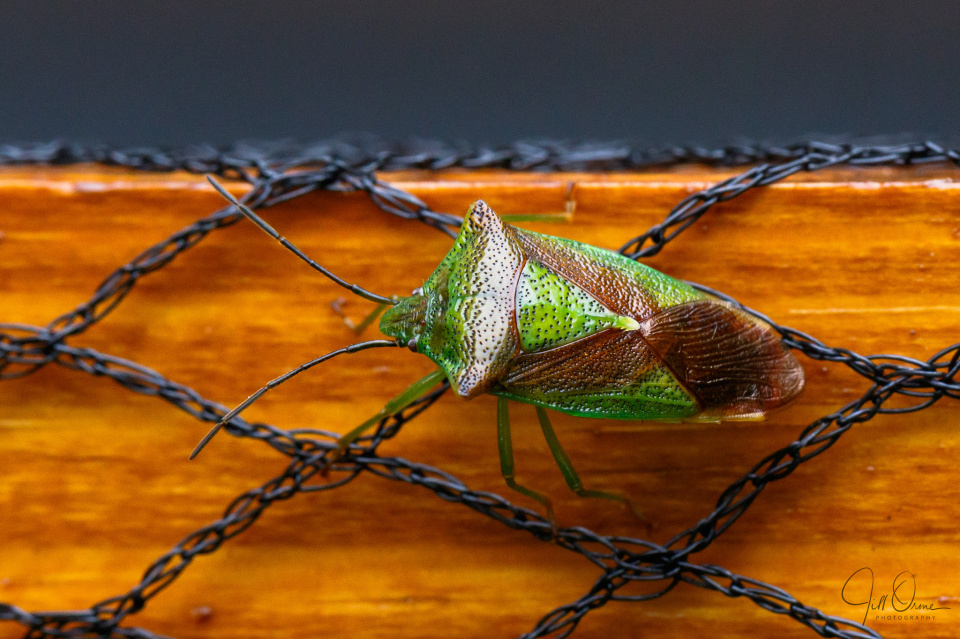 Most shieldbugs are pretty shy and retiring – as would you be if you were as far down the food chain as they are – but when I walked round the corner into the wild garden this afternoon, the first thing I noticed was this hawthorn shieldbug, sitting as bold as you please on the netted frame we’ve placed over the wildlife pond to keep it free of leaf litter. It had been sunny a short while earlier, and as this is the south side of the frame I think the shieldbug had probably been basking to warm itself up.

The hawthorn shieldbug is one of our largest species, coming in at around 15mm in length. The similarly marked birch shieldbug is a little shorter and a little rounder, tends to slightly warmer and duller colouration, and its shield is multicoloured rather than this unbroken green. Also, the lateral extensions of its pronotum are less extravagant than these ones, which make me remember how much I used to like 1980s tailoring. Adult hawthorn shieldbugs feed on the leaves and fruit of hawthorn and other trees and shrubs, while the nymphs, which can be found at any time from May to October, prefer a range of high-energy fruits including hawthorn, rowan, cotoneaster, and whitebeam berries. This adult will probably darken, and may even turn completely red, before overwintering in a tree crevice or in leaf litter. 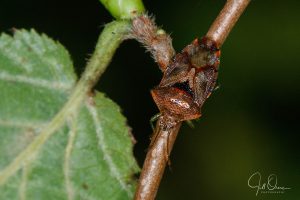 Tonight’s extra is another shieldbug, but one I had to work a little harder to find and photograph. It’s a parent bug (Elasmucha grisea), and this female is around 10mm in length. In summer she will have been buff coloured, with red highlights, a black patch on her shield, and a black and white connexivum (the flattened piecrust border of the abdomen). Now, as you can see, she’s moving into her winter camouflage. There was a smaller male very nearby; if they survive the winter and mate, he will die very soon afterwards, but she will stay alive for some time, guarding and brooding her eggs and young larvae. It’s this behaviour – highly unusual among bugs – that gives the species its common name.