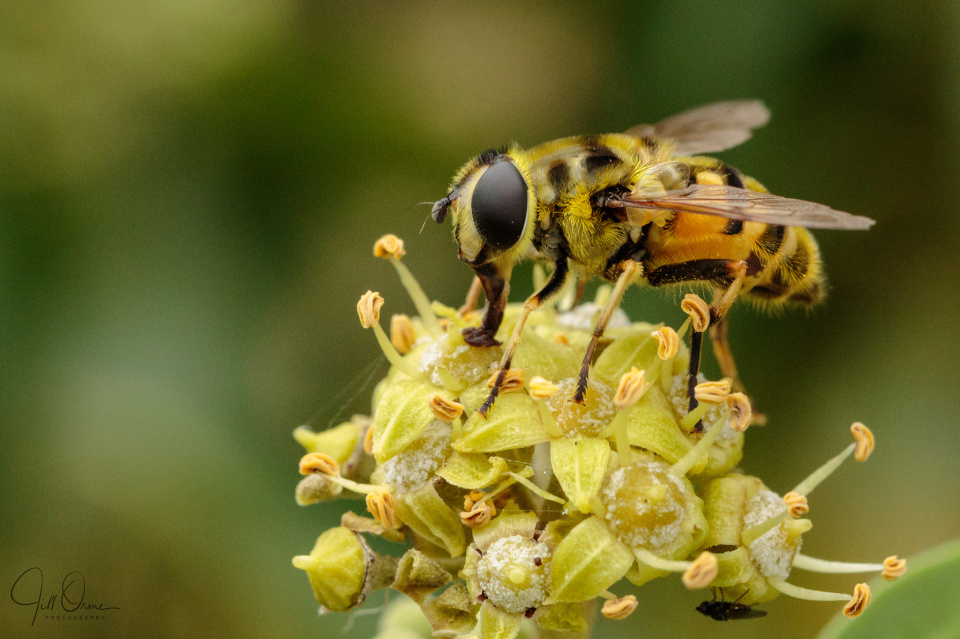 This is a female Myathropa florea – commonly called the Batman hoverfly, though I’ve also seen it called the death-head hoverfly, because of a thoracic marking that you can see quite well in a picture of a different individual which I also took today and posted to Facebook. Personally, I recognise it firstly by its demeanour, which is unusually irritable for a hoverfly (I sometimes find myself calling it Misanthropa florea); and secondly by the fact that it’s seemingly not very good with colour, and tends to wear two clashing shades of yellow.

M. florea is a fairly large hoverfly, and can be found from around April until the late autumn. It likes woodland, and is one of the species in which the males can sometimes be seen hovering at around human head height, watching for the appearance of potential mates. It will also bask on a sunny surface; when disturbed it takes off at high speed, but tends to circle and then land again in the same place, often with surprising force. Females lay their eggs in damp places such as rotting wood or ditches, where they hatch into rat-tailed maggots – that is, larvae that develop in a submerged environment, but breathe air via a thin tube that goes up to the surface. Adults that emerge in the spring tend to be much duller and less well-marked than summer flies, and can be harder to identify.