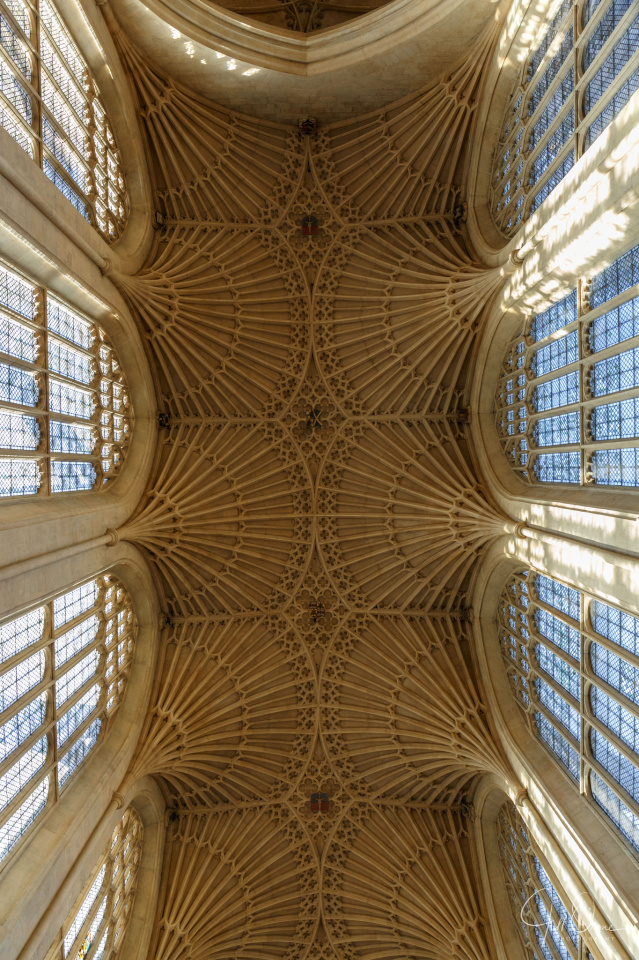 One day I will actually topple over backwards doing this – and like the (fortunately) apocryphal penguins which were reportedly buzzed by bored RAF pilots in the Falkland islands, I will then just have to lie there, feebly waving my wings, unable to right myself again. But I do love a bit of fan vaulting, so it simply had to be done.

R and I made a snap decision to go to Bath this morning, leaving the Shire still trying to fight its way out from under a blanket of cloud that was hanging so low that it kept forgetting itself, and coming to rest actually on the ground. This didn’t make for the easiest of driving conditions, so R was relieved, as we were heading down the motorway, when the fog lifted and the sky began to clear. By the time we reached Bath the city was basking in warm sunshine.

After lunch we went to take a look around the Abbey, because although we’d walked past it many times before, neither of us had ever been inside. It’s a really charming church – not very big, but bright and with a lovely atmosphere. 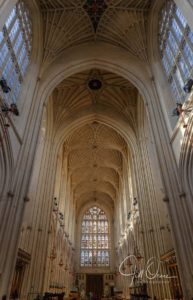 As you can see from the extra it’s built in Perpendicular Gothic style, which together with all the fabulous fan vaulting makes it a sort of mini-me of Gloucester Cathedral, but it’s a much more intimate space than Gloucester, and feels more like a large parish church – which indeed is what it is. It was built in around 1500 as an Abbey church, replacing a Norman church on the same site which had fallen into ruin, and became the parish church of the town of Bath about a century later, following the Dissolution of the Monasteries. The vaulted ceiling of the nave in my main photo is actually a Victorian copy of the original C16th ceiling in the choir, but I can’t tell the difference between them even though I have photos of both.

The best photo I didn’t manage to get today: a cloud inversion resting on top of the city of Gloucester, viewed from the car as the A46 wound narrowly and steeply down off the Cotswold scarp, north of Stroud. Personally I think that people who build roads should give more thought to the needs of photographers, and put regular stopping places on roads with views like that one!