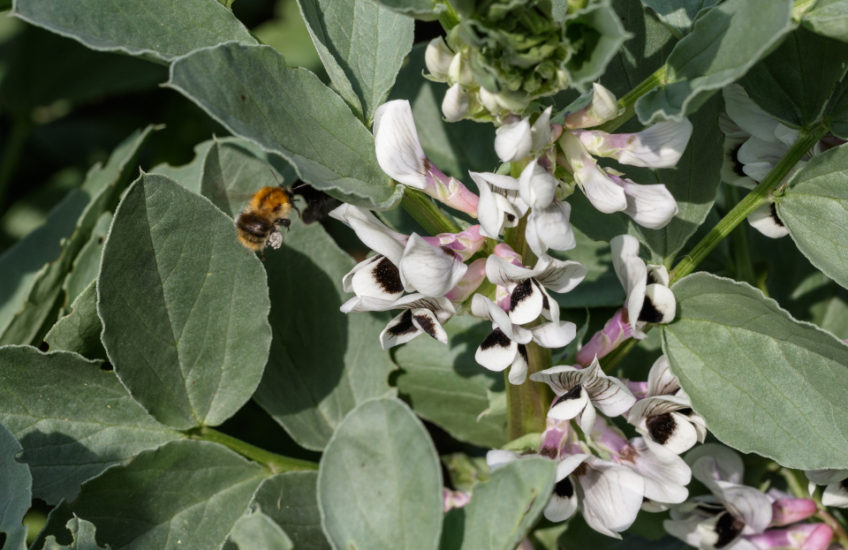 Firstly I would like to say a big thank you to everyone who was so kind about yesterday’s damselfly: I looked for her to tell her that she was much admired, but couldn’t find her – so I’ll just have to hope that she hasn’t already been eaten by a larger carnivore. Life is tough when you’re quite a long way down the food chain.

This morning I went for an early bug walk, first around the garden and then around the parish, becoming increasingly concerned that there were almost no bees or hoverflies about. As I walked I was formulating various ill-informed theories about the recent lack of rainfall, which is definitely suppressing the growth of both wild and cultivated plants here, and the possibility that as well as there being fewer flowers for bugs to feed on, the plants which are flowering might be producing less nectar.

And then I came to a field which spans the whole of the west side of the village, and as I opened the kissing gate to go into it I was simultaneously hit by the smell of beans and the sound of a harmony of buzzings. Last year this field was laid to wheat, and if I remember rightly the year before that it had barley; but this year it’s growing some kind of leguminous crop which I think is a green manure: on past experience the crop will set pods but will be allowed to go over and wither, before being cut and ploughed back into the soil. Currently it’s flowering, and was absolutely humming with bees – it’s quite a large field, so there was no reason for them to hang around the edge of it, but even from the path I easily identified three species of bumblebee and three of mining bee, plus a good number of Hairy-footed Flower Bee queens and some honey bees.

It makes absolute sense from the bees’ point of view, of course – they only have a limited time to construct their nests and produce their offspring, during which time they have to feed themselves and collect pollen to provide food for their larvae, and there’s little point in them wasting their time and energy searching the village’s somewhat stilted and wilted flower beds when they have several acres of flowering beans to browse. I just wish they’d spare a thought for the photographer….

This evening R and I have been to The Regal to see Hidden Figures, which is an extraordinary story, compellingly told (and according to R’s research since we arrived home, pretty accurate as well). I strongly recommend it.