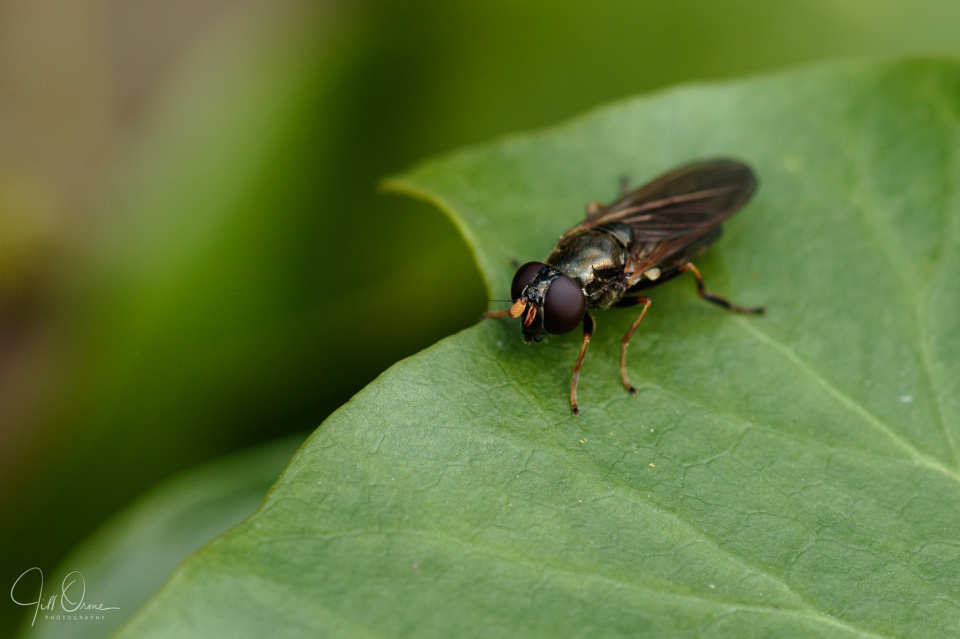 I was lucky to spot this small, dark hoverfly on a dark ivy leaf in a shady part of the lane today. She’s Cheilosia pagana, the most common species out of the largest genus of hoverflies in the UK, but very easily overlooked because they’re so small and unassuming.

That said, the large orange antennae are a little bit Look At Me – and indeed, it was the antennae that made me do a double take, back up, and turn the macro on her, rather than just walking on by. I was slightly disapproving of them at first. “Are you wearing them,” I asked her, “or are they wearing you? Because if it’s the latter, you might want to reconsider.” But after living with this photo for a while I think I may have been a little unfair. They’re flamboyant, but not garish; out there without being outré. I can only hope that I didn’t hurt her feelings – I wouldn’t want to be responsible for crushing someone’s self-confidence.

Falk calls Cheilosia the vegan hoverflies, because their larvae eat plant matter: some develop in the root systems of particular plants, others are leaf miners, and some develop inside fungi. He refers to this species as the Parsley Cheilosia, because its larvae are particularly associated with the roots of cow parsley. C. pagana has a long flight period, from spring through to autumn, during which time it goes through at least two broods. The adults favour a range of flowers, from spring celandine, through summer umbellifers, to the autumn ivy that this female was visiting today.