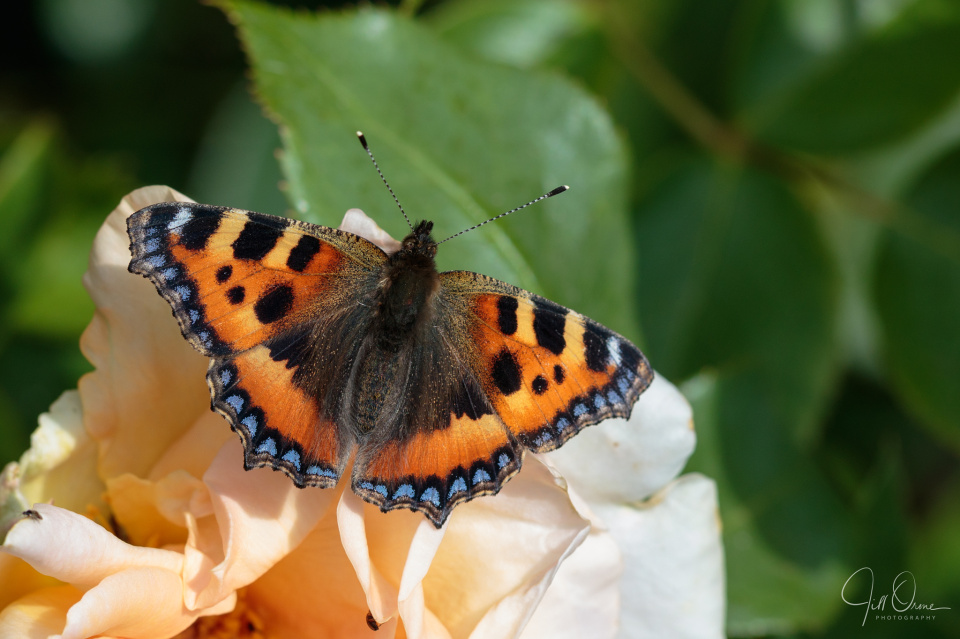 I was surprised and pleased this morning when I spotted a Small Tortoiseshell browsing on one of the blooms of my champagne rose: they more often than not choose a far less photogenic background than this to rest against. Admittedly this particular flower is a bit ragged, but the colours work nicely, I think.

My phone (which underestimates compared with R’s FitBit) tells me that I’ve done nearly 11,300 steps today, which is surprising, because I thought I’d had a slow day. We did quite a bit of gardening yesterday (eeeurgh), and I got up this morning feeling considerably more ragged than the rose, so I decided that gentle pottering would be the order of the day; the only things on my agenda were a little photography, a little financial admin, a nice lunch, some time at the wildlife pond, and a Zoom meeting with the Offspring. I can only think that the photography must have involved quite a lot more wandering up and down the garden than I realised at the time – our plot is well over a hundred metres long, so you don’t have to go back and forth too many times to rack up a thousand steps.

The most exciting event of the day turned out (sorry, Offspring!) to be the uploading of last night’s videos from the garden cam. We’ve been fairly sure for a while now that we have three different adult foxes using the garden, and that was proved by all three turning up together in two of the films. We also witnessed some very sexual behaviour between the larger dog fox and the vixen, and though a little research has taught me that this is the wrong time of year for them to be mating, it’s encouraging to think that next spring we might possibly see cubs in the garden.

The most surprising visitor of the night though was a little owl, which as far as we could tell was investigating the hedgehog food that R puts out near the pond each evening. Over the winter we heard little owls chatting in the garden several times, but we never managed to see them, so we were very happy to have captured these few seconds of film.