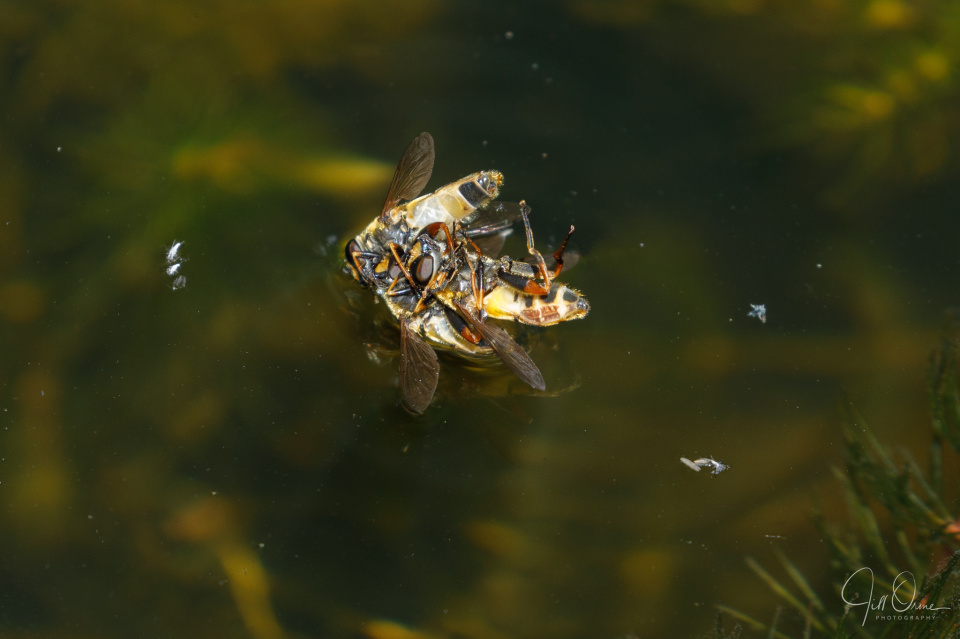 Shocking scenes took place at The Wildlife Pond this morning, when a lone male Helophilus pendulus attempted to force his way between a courting couple, and abduct the female. Our reporter was on hand, and spoke to several eyewitnesses.

The photographer who captured this image told him, “Honestly, I’ve never seen anything like it. It began over in that corner by the brooklime, and for a couple of seconds I couldn’t work out what was happening – I thought someone was being predated! And then they rolled and spun across the surface of the pond for ages, and quite often one or other of them was right under the water. How they didn’t all die I’ll never know! Eventually one of the males flew away – I guess that was the attacker, when he’d realised he wasn’t going to win – and then the other two lifted off the pond surface together and landed over there. I tried to take some more photos of them, but they got all huffy about it and disappeared off somewhere else.”

The photographer made some further comments about patriarchy and the role of females in society, but by this time our reporter had stopped listening and moved on to talk to a Large Red Damselfly, who had also witnessed the incident. He said. “It was most unpleasant. We damselflies copulate decorously – one might almost say artistically – and always consensually. This kind of behaviour simply wouldn’t happen. But though I confess that I was shocked, I can’t honestly say I was surprised. Those hoverflies are really quite…. common.”

However a Semaphore Fly disagreed, and told our reporter, “It was just a bit of rough and tumble, you know? Nothing serious. Oh yes – I had a front row seat for the whole thing. Over there, on that leaf. I’m not saying it’s something I’d do myself, mind – not that I need to – I’ve never had any problem with the ladies, if you know what I mean! But I’m a live and let live kind of guy, you know? Whatever floats your boat, I say – and if I’m honest I quite enjoyed it! As a spectator sport, I mean. I said to my mate there that they’re going to have to change the wrestling rules: two falls, one submission, a knockout or a drowning!”

In stark contrast to this opinion, a tandem pair of Azure Damselflies, who were disturbed from oviposition by the fracas, were so distressed that they hid in the nearby quince tree for some while afterwards. Even after returning to The Wildlife Pond they declined to be interviewed: they were still, they said, too shocked, and couldn’t bear to relive the experience.

A passing frog, asked by our reporter for his opinion, said, “I wasn’t here. I wish I had been. I’m quite annoyed that no-one fetched me. It’s something I’d like to have seen.”