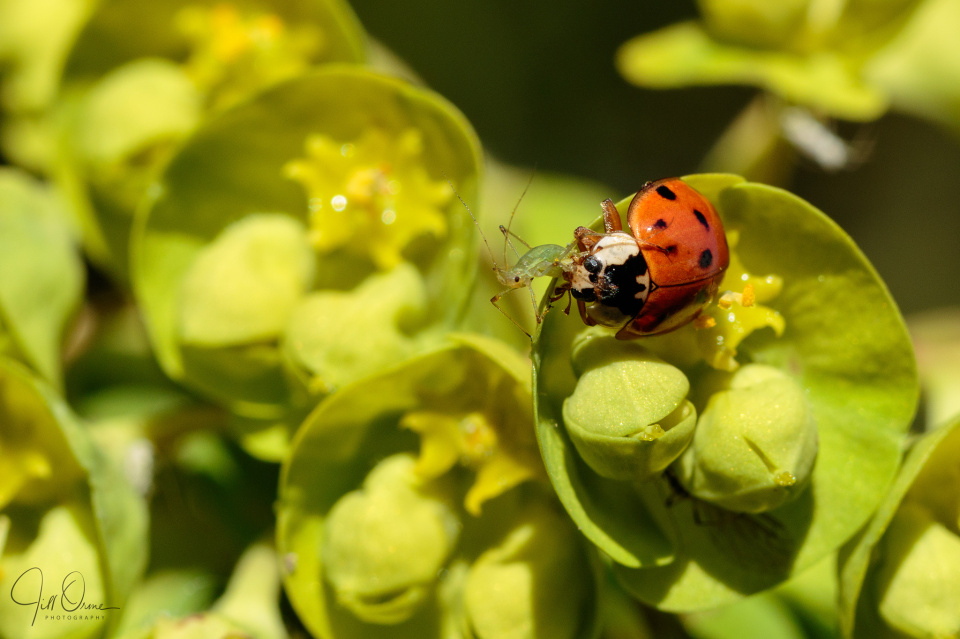 This one’s probably not for the squeamish – so if that’s you, I apologise. You can be thankful though that in a still photo you can’t see the unfortunate victim (which I think is some kind of cricket nymph) struggling – which I could as I was recording its demise.

I did a couple of hours’ gardening in the middle of the day, but had to shelve my plan to go out afterwards when I hit a physical and emotional brick wall. It’s definitely good for me to push myself a little bit further than I’m comfortable with, but the past couple of weeks have been crazily busy, and this afternoon I seemed to run down like a spent battery. Feeling pretty sorry for myself, I sat on the patio with a drink, and after a while the sights and sounds of nature in the garden started to engage my interest and make me feel better. As well as all the usual small garden birds braving my presence to visit the feeders, I could hear little owls chatting to each other in the orchard across the road, a buzzard mewing nearby, and a woodpecker drumming in a neighbour’s garden.

It was when I heard manic high-pitched humming and saw a gingery-coloured bee shoot past at high speed that I really perked up: I’m 90-something per cent sure that it was a hairy-footed flower bee, but couldn’t see it clearly enough to identify it firmly. Easily identifiable, but too fast for me to get a lens on – and for the same reason, which is that he was frantically searching for a mate – was the beautiful Brimstone butterfly that whizzed through at regular intervals. I was able to record a couple of marmalade flies, and also my first bumblebee of the year: a large and sluggish Bombus hypnorum queen, browsing the flowers on one of my daphnes.

It was when I was kneeling in the middle of my newly tidied flower bed to capture this scene that I realised how much I love macro photography, and how much I miss it during the winter months. I’d just stood up and stepped back onto the “lawn”, when there was an almighty crashing noise from the other side of the garden, and the shrubs lining the boundary fence began to shake as though an elephant was on its way through them. I stood and waited, betting myself a new macro lens that the intruder would turn out to be a deer rather than an elephant, and a few seconds later a muntjac shook itself free of the choisya, saw me, veered back towards the fence, and crashed off down the garden at high speed, leaving me shaking my head in bemusement that something would be stupid enough to come… through? …. over? a fence that’s lined on the far side with a thick leylandii hedge and on ours with a line of shrubs, when it could simply have walked up the drive and through the open gate. It probably did quite a lot of damage – but with luck only to the garden, and not to itself.

On the plus side, I owe myself a new lens.