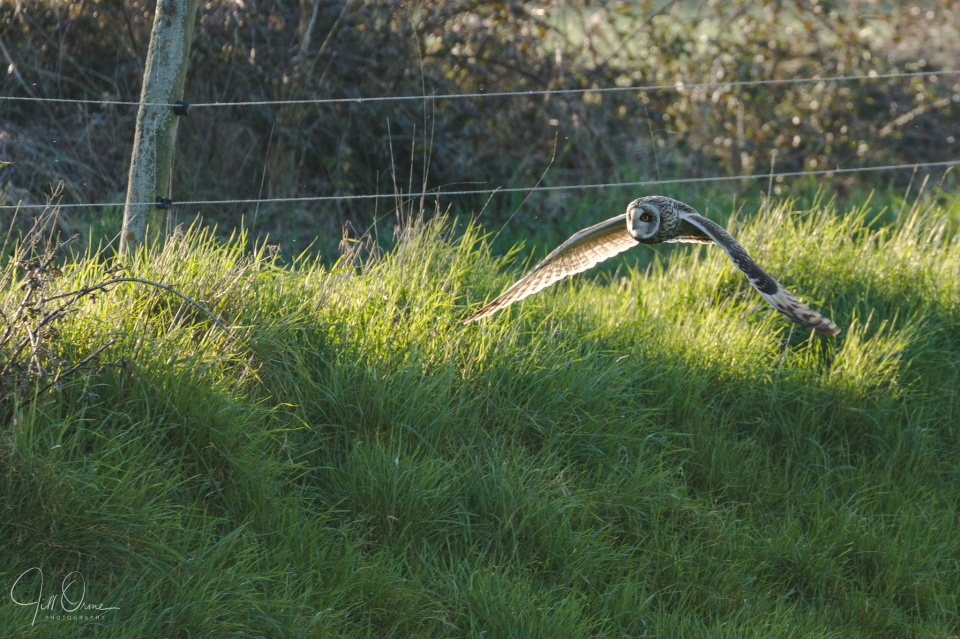 After doing some actual work this morning (oh, the pain!) I zoomed off down to Somerset, and walked 14,000 steps around Steart Marshes wearing the Big Boots. As it was my first visit I wasn’t able to guess how long it would take me to get from the car park to the River Parrett estuary, and I arrived about half an hour after high tide – which was quite enough time for most of the waders to have moved back out onto the exposed mud flats and away from my lens. Nonetheless I had a lovely yomp along the trail that runs between the marsh and the river, watching redshank, shelducks and curlews noodling about in search of food, and from time to time being astonished by the speed of a merlin fly-past.

I’d almost given up hope of getting a decent photo of the merlin, when I scanned the marsh with my binoculars and spotted that it had come to rest on a clump of dead stalks. It sat and waited while I walked to a position where it wasn’t half-obscured by rubbish, allowed me a few shots, and then took off and made the leap into hyperspace: within seconds it had totally disappeared. I’ve put one of my photos of it in the extras; the pale breast seems to suggest that it’s a female, but the blurry flight shots I have of it show male colouration – that is, a greyish back, with dark edges to the wing and tail coverts. 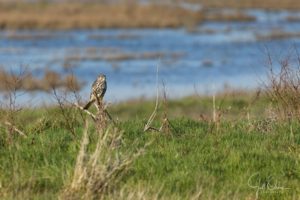 By the time I got back from the estuary to the main entrance, the afternoon was getting on, the gear and Boots were weighing heavy, and I was quite tired – with a two-hour drive in prospect between Steart and home. But… owls. I’d been told that I might see one on the Parrett Trail, but I hadn’t, which had been disappointing but not really surprising as the ground is so marshy. But I thought I knew where I might find one, so I pushed on in that direction, and just after I came out onto the road, where another couple of photographers were standing waiting, this happened.

The owl flew in from the direction of Bridgewater Bay, quartered the field briefly, flew along the fence line towards and then past me, lifted over the road, and dived straight into a drainage ditch on the other side. As the three of us walked towards the scene we could see a struggle going on, and then the owl lifted again, carrying a humongous rodent. I don’t know what the unfortunate victim was, but I fear it may have been a water vole – if you’re a better naturalist than me (not hard), you might want to take a look at the second extra, which shows the size of it compared with the owl, and the length of its tail. Whatever, a couple of hundred metres was as far as the owl wanted to carry its prize: it landed in a rut in the ground, hunkered down without eating, and calmly went to sleep. 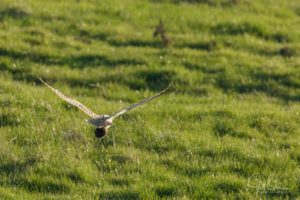 The last photo I took as the owl came past me was very murky because of the strong back light; but I’ve beaten it into submission in Photoshop, and put the result on Facebook, if you’re interested. It’s far from a perfect photo, but I love the light shining through the owl’s wings.