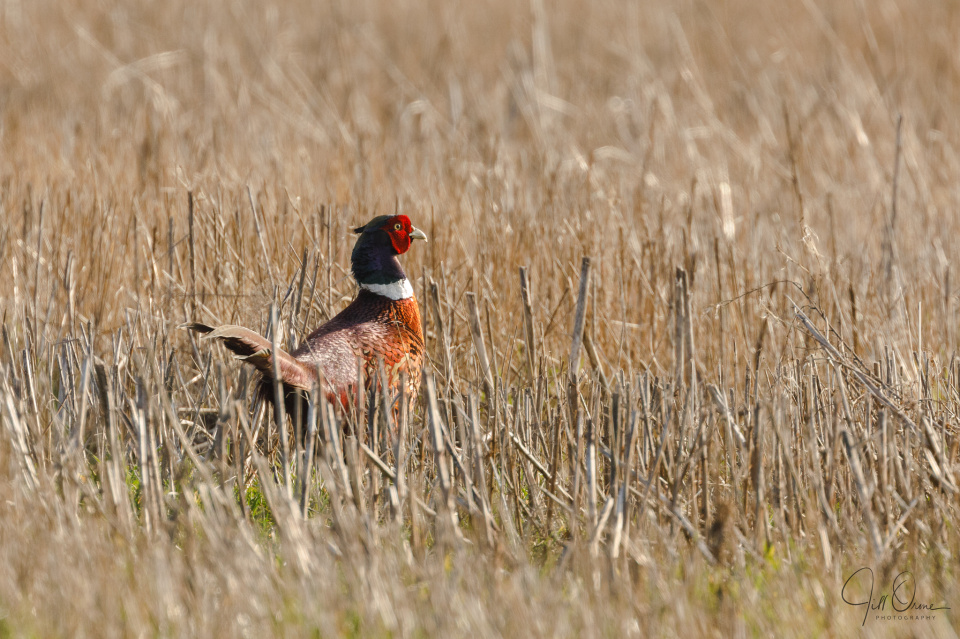 He had a nasty feeling that there was something stalking him, and he was right; but luckily for him, my intentions were reasonably honourable.

This morning R and I did more gardening (eeeurgh): we’ve tidied half of the large rose bed, and sadly, found some gaps where things haven’t made it through the winter. If the weather holds I’ll try to do the other half tomorrow morning, and then maybe brave the garden centre in search of some replacements.

This afternoon I went up to the owl field, where the first thing I saw were some young hares playing around – charming, but too distant for decent photos. I then walked round to the north side of the field, but only found a couple of pheasants and some skylarks – which were singing beautifully, and occasionally ascending, but were hard to photograph against quite a misty light. After a while I saw an owl go up on the other side of the field (of course), and was hopeful that it would turn in my direction, but it didn’t; and then began half an hour of me chasing around three sides of the field, while two or three owls played the extremely amusing game of flying back and forth past where I’d been standing five minutes earlier.

“It’s all part of the fun,” I said to another victim, through gritted teeth.

Most of the photos I managed to take were shot into the light, and almost all of them wound up in the trash this evening; but I did find a few keepers, one of which I’ve posted to Facebook, should you be interested.