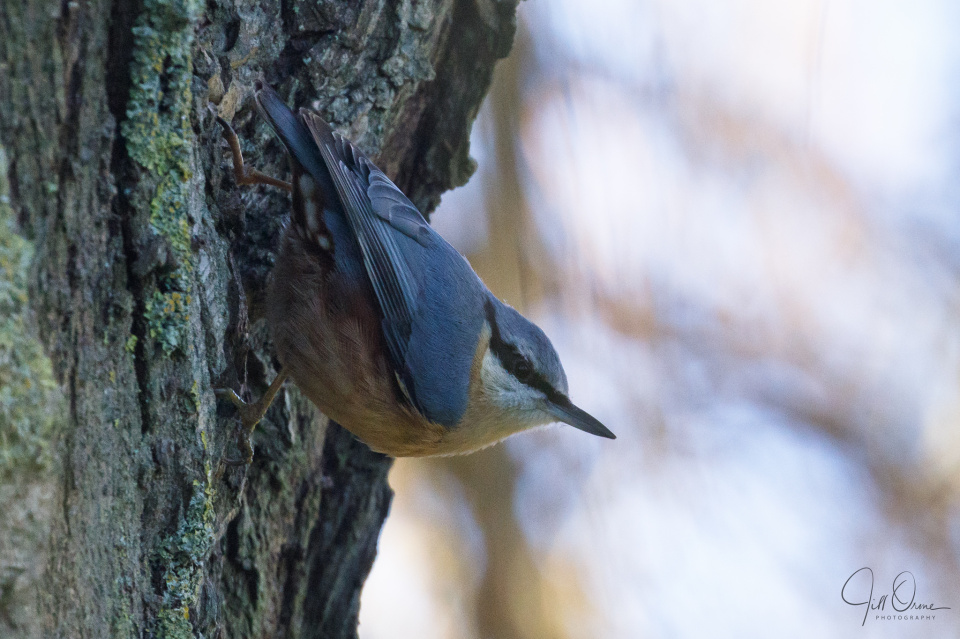 I’ve now changed my mind so many times about which of today’s birds to feature in this post that I’ve circled all the way through the possibilities and arrived back where I started. I’ll try not to change it again before hitting the Publish button.

The two photos in the extras are both technically better than this one, for the simple reason that the subjects were in good light and stayed still long enough for me to capture them with crisp focus. This nuthatch, on the other hand, is a little murky even though the focus is pretty good, for the simple reason that I had to shoot it through a hanging curtain of willow twigs. But this is a well-camouflaged bird that’s less than 15cm long, and can run in any direction it chooses (and fly whenever the mood takes it, obviously), and I’d chased it round the willows on Stratford ‘rec for a good quarter of an hour by this point, twisting and turning and bending and stretching to try to keep track of it as it searched the bark crevices for grubs, and I was starting to feel slightly dizzy, and not a little unhinged. So managing to seize the moment when it suffered a split second of indecision, and ending up with two reasonable photos, was quite an achievement even if I do say it as shouldn’t – and I’m sure that when I think back on the day, this bird is the one I’ll remember. 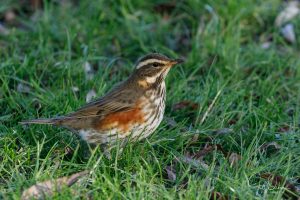 Shortly after I got my two photos the nuthatch gave up on the ‘rec, flew across the river to a big plane tree in the theatre gardens, and began calling for a mate. Quite frankly, I was relieved to see the back of it. It was then that I spotted the redwing, which had been rummaging around in the shade under the trees, but just happened to move out into the sunlight as I walked past. This lovely creature was far more obliging than the nuthatch and allowed me multiple portraits. I had some ground food in my backpack (because of course), and remembering the way the redwings in Iceland mug tourists for food I momentarily considered offering it some, but I resisted the temptation because of the embargo on feeding birds in the centre of Stratford during the current avian ‘flu outbreak. 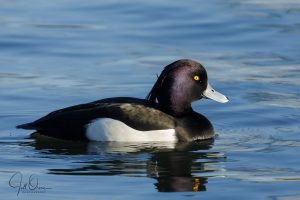 As I reached the Bancroft stretch of the river I was surprised to see a single tufted duck swimming at the edge of a group of swans and geese. In the photo I’ve posted above it looks quite calm and sedate, but I couldn’t help but be a little concerned for it: birds travel in flocks because there’s safety in numbers, and it’s a perilous undertaking for one to try to migrate alone. With luck though it will manage to join up with other ducks as they pass through or over Stratford, and get away to its breeding territory in company.