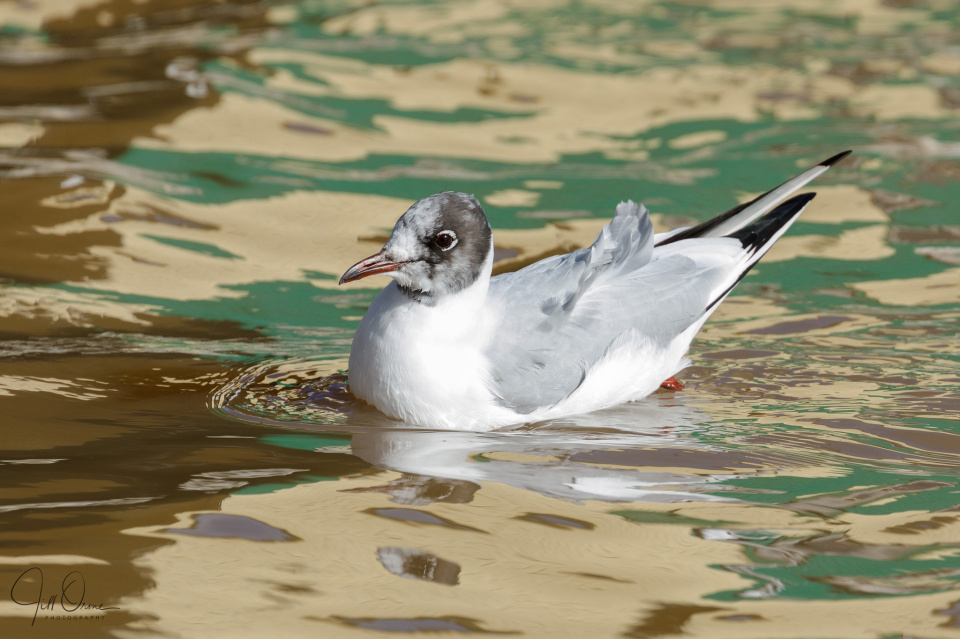 It’s a good thing that R dragged me into Stratford this morning for errands and coffee, or I’d probably have spent the entire day at my desk. There’s another storm brewing and the river was high, which always seems to mean that there are fewer birds about – I guess they must take themselves off to somewhere they feel safer when they sense that bad weather is on the way. Several mute swans were bathing very energetically between the nature reserve and the Old Tramway Bridge, but the light on them was quite harsh, and I prefer this shot of one of the handful of black-headed gulls that was still risking the river today.

Back at home I spent the rest of the day working on my web site. I set this up back in the difficult days when it looked as though blipfoto might go out of business, originally just as a home for my blog. Over the past few years I’ve added various bits and pieces to it, but I’ve never put a great deal of time into it, for the simple reason that I didn’t know whether anyone other than me ever looked at the thing. Recently though, I added a widget that counts visitor numbers, and when I remembered to go and check it this morning, I was surprised to see how many visits it had logged.

I then went, in one graceful swoop, from being pleased that I’m not just yelling into the void, to being horrified that I was potentially being judged by strangers on galleries that were so out of date that many of the photos in them have now been deleted from my own system. I updated some of the galleries and removed some others, and was pretty happy with my day’s work until I discovered that they’re not all displaying slideshows as they’re supposed to: out of five galleries, two are working normally, two aren’t working at all, and one works until it gets to a particular point in the slideshow, when it freezes. I wasted a couple of hours of my life trying to work out why this has happened, even rebuilding the Wildlife gallery from scratch, but in the end I’ve had to admit defeat. I’ve emailed the developer of the gallery plug-in, in the hope that they’ll be able to suggest a way of fixing the problem; the only other thing I can think of to do is to rebuild the entire page, which isn’t an enticing idea.

Back when I started creating the site Child One offered to help, and spent a couple of hours talking me through the nuts and bolts of styles, colours, menus and so on. This was enough to get me started, and since then I’ve learned enough to be able to handle most things myself, with only occasional technical help from my hosting company. Today though, I can’t help but remember that almost the first thing L said on the subject was “Don’t use WordPress” – not especially helpful at that stage given that I’d already bought a site with WordPress installed, but with hindsight I’d describe it as sterling advice.

EDIT: 10Web, the developer of the gallery app, responded promptly and positively to my query, and rapidly fixed the issue. I recommend them!