Short-eared owls will take small birds, but fortunately for the pheasants they were too big to be of interest – though the sequence of shots I took of this fly-past shows them watching the owl intently. Please do look full-screen, if you have the time.

It was another long, and bitterly cold, afternoon in the high Cotswolds, with no sign of an owl for quite a long time, and owlers rushing about firing off shots at plover, partridge, yellowhammer and the great grey shrike, whenever any of them were careless enough to come within camera range. I was starting to get a Bad Feeling, when – about 90 minutes before sunset – the first owl appeared and was greeted by a great clatter of motor drives, which it completely ignored. For the next hour there were regular hunting runs by several owls, though none came close enough to the road for me to be thrilled with my images. I was, though, thrilled by the owls – they’re somehow magical creatures, and it feels like an enormous privilege to watch them. I had the feeling that the hunting was good this afternoon, with regular kills being made; the extra shows the moment this owl dropped onto some prey. 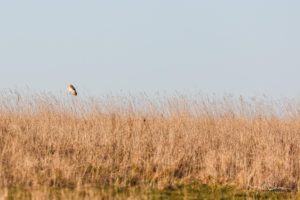 I’m going to need an Even Bigger Lens.