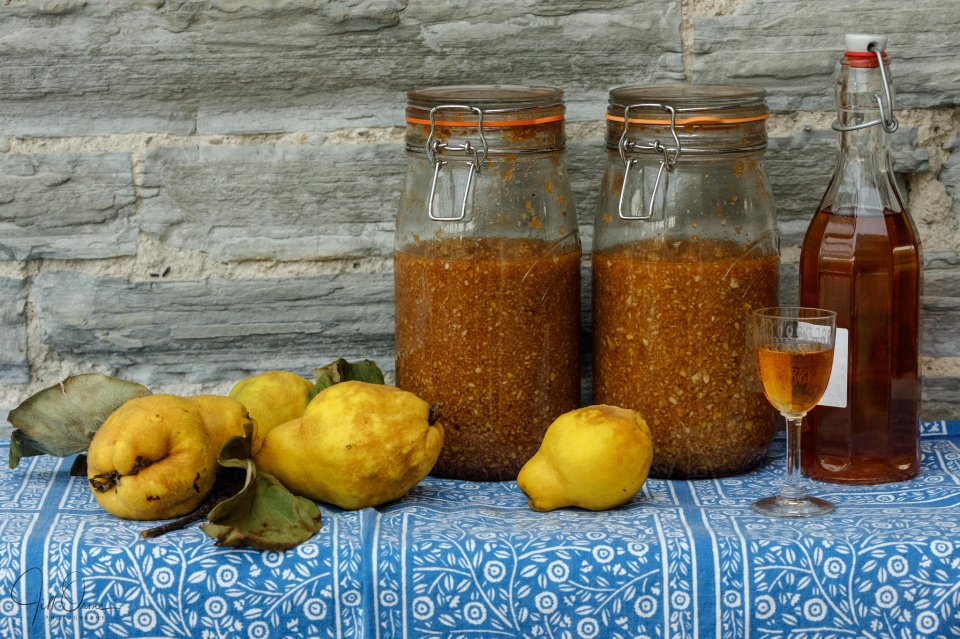 On a day when I had to brave bitter, driving rain to fill up the bird feeders, because even in those conditions tiny garden birds were queueing up hoping for food, and R decided that it was time to break out the Winter Pimms, I decided to bottle some sunshine. If I’m honest, guilt came into it too: I told you a couple of weeks ago that I’d post this recipe, and I’ve been promising R that I’d deal with the European Quince Mountain ever since it began accumulating in the kitchen. So I hunted out the recipe and some Kilner jars, acquired vodka and sugar, and set to work.

The basic proportions are roughly these:

2 large quinces
1 cup of sugar (I use unrefined caster sugar)
2 cups of vodka (any kind will do).

A cup is generally taken to be 240ml, so each of these jars began by receiving half a litre of vodka and a cup of sugar. I scrubbed my quinces clean, cut each of them into eight chunks, and then blitzed them – peel, pips and all – in the food processor. I should say at this point that “large” is a highly relative term – my quinces are big enough that I was only able to get rid of two per jar (as per the recipe), but you may need more. What you want is for the liquid to be full of minced quince, in a container large enough to allow for vigorous shaking. The quinces will oxidize, but don’t worry about that – it doesn’t spoil the flavour, and it adds to the colour.

Once you’ve shaken the jars well, to dissolve the sugar and mix everything up, put them in a cool, dark place. Shake them every other day for a couple of weeks, and then once a week for at least another month. When you’re too desperate to try the result to wait any longer, strain the mixture and bottle the liquid. I generally strain it twice: first through a fine sieve , which removes most of the quince, and then again through an unbleached coffee filter to take out as many small particles as possible. This is time-consuming, and you’ll go through a lot of filters because they block up quite quickly, but I think it’s worth it to get a good result. You’ll arrive at a beautiful amber liquid which looks crystal-clear – though over time (if your quince vodka lasts that long) a layer of sediment will still appear in the bottom of the bottle. You can either re-filter it if you’re fussy, or simply pour it very carefully to leave the sediment behind, as I did today.

This is a pretty forgiving substance; the bottle that I unstoppered today for the purposes of this photo came from a batch that was set to steeping five years ago, but that I only remembered to strain, bottle and label in February 2014. Since that time it has been in my stash of potions under the stairs, and I’m happy to report that, despite the sediment in the bottle, the liquid in the glass was delicious. (Having said that, in the same year a friend of mine made some that fermented, due to an unusual level of natural yeast in the fruit, so it may be worth carefully releasing the lid of the jar every now and then, in case there’s pressure building up.)

We generally serve this as a liqueur, but a small measure mixed with prosecco also makes a lovely cocktail.