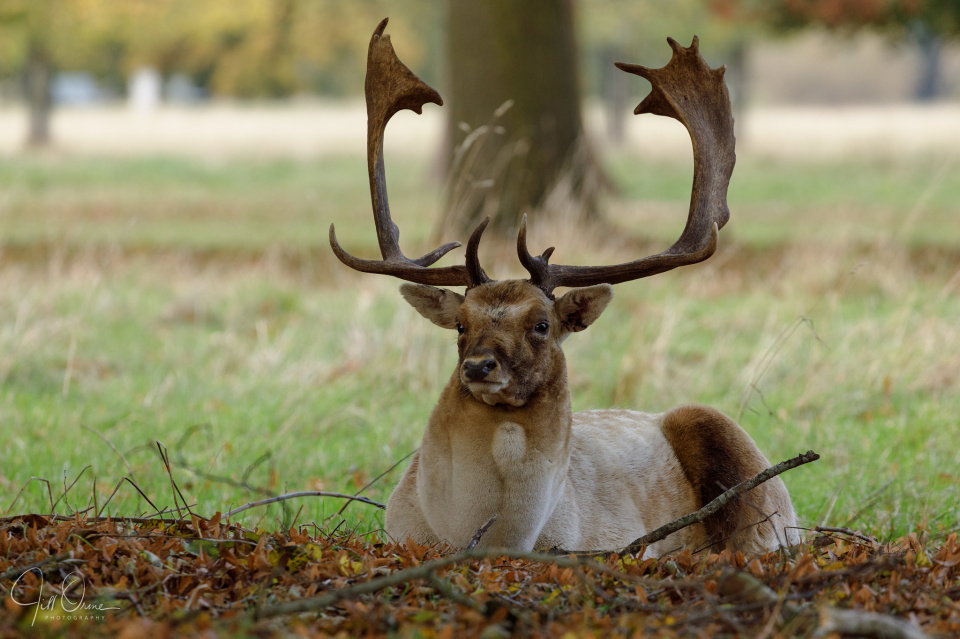 Almost the entire herd of fallow deer were hanging out in groups in the West Park at Charlecote today, but there were just a couple of solitary bucks in the Front Park, lying very quietly, this one under some trees by the main drive and the other against a fence.

I always find these old boys very poignant: I don’t know whether they’ve been bested in this year’s rut, or if they’re just so old that they don’t want any part of it, but to see them alone when deer are herd creatures makes me rather sad. It’s noticeable that they are much less reactive than is usual with fallow deer (especially during the rut, when they’re mostly nervy and skittish) – the path I was using went within a few yards of this one, and he simply looked at me and made no effort to leave.

When I came back after my (bitterly cold) walk he was still in the same place, though now standing and grazing. Because his face is pretty tidy – he’s certainly a lot less marked than some of the current champion bucks – I went to take another look at him in slightly better light, and he has some old scars on his flanks, but nothing that looks fresh; so perhaps he’s just too old to get involved with all that rutting nonsense.

Every year there’s a cull at Charlecote, to keep the deer herd to the size the park can sustain, and to maintain a balance between the different colourways they have here. I don’t know how the deer wardens choose the deer they cull, but it wouldn’t surprise me if the old ones that are beyond their breeding years are high on the list. Personally I couldn’t be involved in keeping livestock: decisions like that would be entirely beyond me. There’s some information about the Charlecote herd here, if you’d like to know more.