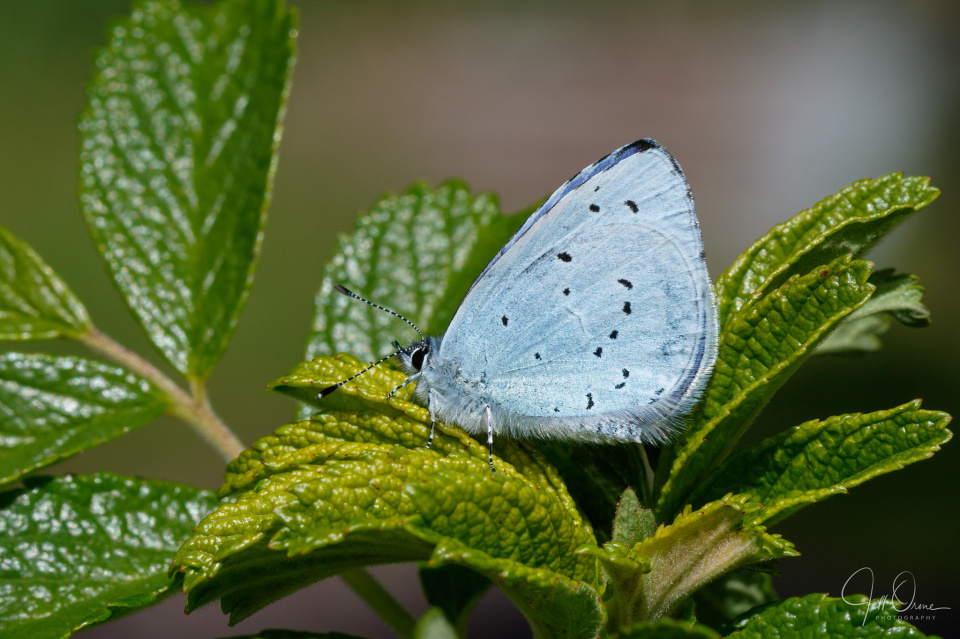 It seems that we might have acquired a more normal weather system than the one that’s been sitting over us for the past week, because after a cold night, today was a sunny, warm, spring-like day. This morning R and I went for a walk around Croome, and enjoyed ourselves much more than we have on our past couple of visits. I pointed out to him that he’s now Odonata-trained, after I’d reminded him to look out for damselflies around the water courses, and he promptly responded, “Too early.”

During our walk I got some good, close shots of a male blackcap in the shrubbery by the lake, and fully expected to be posting one of those this evening, but when we arrived home almost the first thing I saw was this pristine, fresh male Holly Blue, who improved his credentials still further by allowing me to walk right up to him with the macro. It’s not obvious from this image, but he was busily engaged in eating something – presumably honeydew, though I haven’t actually seen any aphids yet this year – from the surface of the leaf. At the same time he was performing an odd little movement, which I’ve seen several species of small butterflies do, which was to keep his wings folded like this, but move the the surfaces across each other as if he was rubbing them together, and it was this that allowed me to catch sight of the narrow black border of his forewing, and identify him as male. A little later I found him basking on the nearby aucuba, and got an even better view of his overwing markings; I’ve posted that image below. 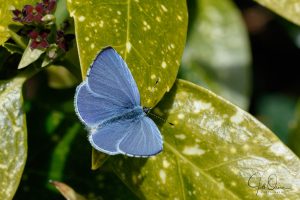 The Holly Blue was far from my only good invertebrate of the day: the sudden improvement in the weather had brought about a veritable bug explosion, and there were bees and hoverflies almost everywhere I looked. But I resisted the temptation to spend the entire afternoon running back and forth with the camera, and managed to achieve some good work in the garden as well, most notably planting a ceanothus against the south-facing yard wall, where I hope it will thrive and provide plenty of food for nectar-feeding insects for years to come.