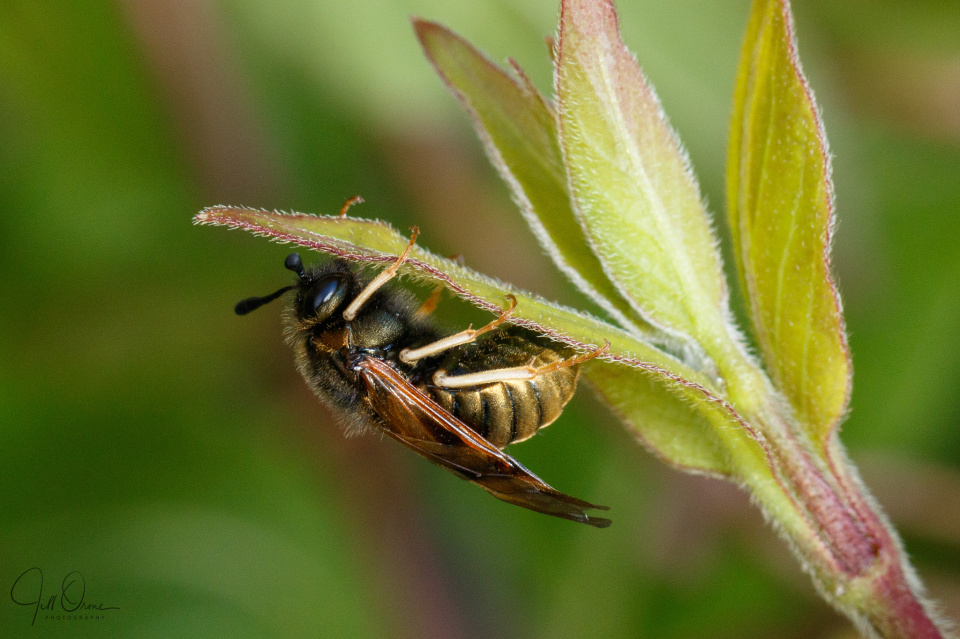 I’ve been searching for one of these little guys for the past few days, because my experience is that if you don’t find them in early April you’ve missed them for the year, so I was pleased to spot this one today. You wouldn’t think it would be hard to track down a honeysuckle sawfly, given that they’re quite big (around 14mm in length) and come decked out in gold, but they’re extremely shy and retiring for something that dresses like a 70s glam rock star, and generally fly away at the first sight of a human. The only reason I managed to catch up with this one was that the poor thing was too cold to fly. Mwahaha. Luckily for the sawfly my intentions were only slightly dishonourable, and once I’d bent this honeysuckle shoot every which way so as to photograph my victim from multiple angles, I tucked it back into the mass of stems and watched the sawfly laboriously trudge away in search of a sheltered hiding place.

There’s an ongoing debate about the classification of honeysuckle sawflies, and whether or not they can be identified from photos, but I won’t bother you with all of that. What’s more interesting is that they’re not actually flies at all: flies have two wings, as the name of their order – Diptera – would suggest; but sawflies have four wings and belong to the order Hymenoptera, which means that they’re related to bees, wasps, and ants. They can’t sting though, and the only problem they present to humans is that the larvae are voracious eaters of various kinds of plant. The adults, which are very short-lived, feed on nectar and pollen.

Although it snowed again overnight and the day remained cold, the weather this afternoon was a little more hospitable than we’ve had to endure for the past week, and after my triumph with the sawfly I decided to pay the garden back by tidying one of the borders, and moving a couple of unhappy plants to better positions. I didn’t enjoy it, but I do feel better for having made the effort.