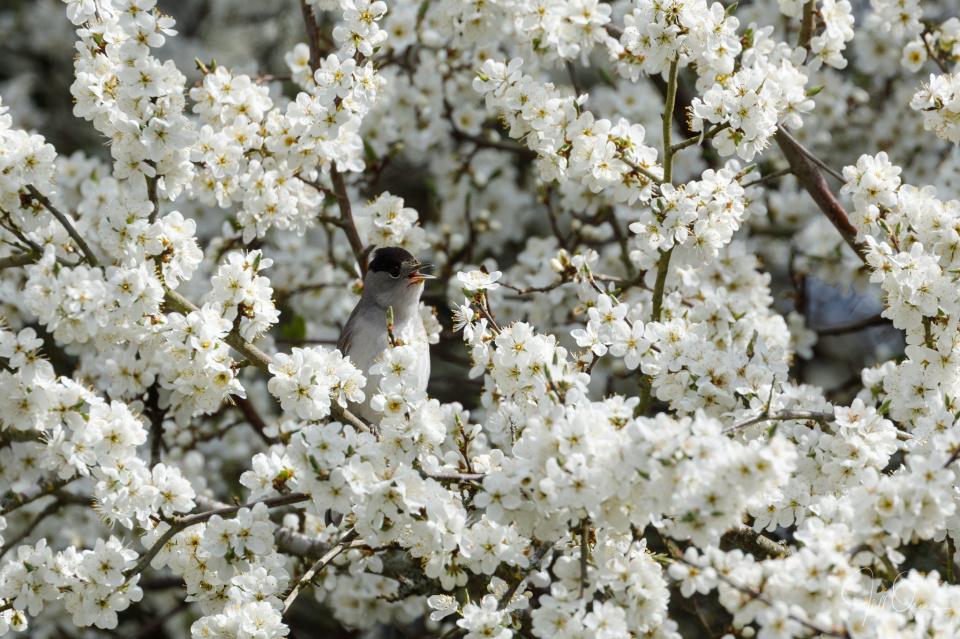 We had all the weather today: frost, snow, hail, biting north-westerly winds, and short spells of deceptively bright sunshine, which repeatedly tricked me into thinking that it was a good idea to go out looking for insects – only to be reminded fast and forcibly that insects (and I) prefer our weather to be coming from somewhere other than Iceland. Don’t get me wrong: I love Iceland. I just don’t want it to be Icelandic in my garden, in April.

Anyway, there I was, out in the front garden with the macro, shivering, on another fool’s errand, when this blackcap began singing in the hedgerow directly across the lane. I could see the disturbance he was causing as he hopped about among the blossom, but the bird himself was quite difficult to pick out until I fetched the big gear from the house. I stayed on my front lawn to take my photos, which kept enough distance between us for him to tolerate the attention. I’ve chosen this shot of him singing because I really like his attitude and the fact that he’s completely surrounded by blossom, but I’ve also put a little sequence of him searching for food over on my Facebook page, if you’d care to see it.

Much of the village is festooned with white blossom (various) at the moment, and it was only when I looked at my photos a little later that I found myself wondering what kind this is – so I went over the road to look more closely at the tree, and was surprised to realise that it’s a cherry. We’ve lived here for twenty years, and you’d think I might have spotted before now that there’s a cherry tree in the hedgerow opposite our house, but in my defence it’s never put on as good a display as this before, and I’ve never known it to set fruit.